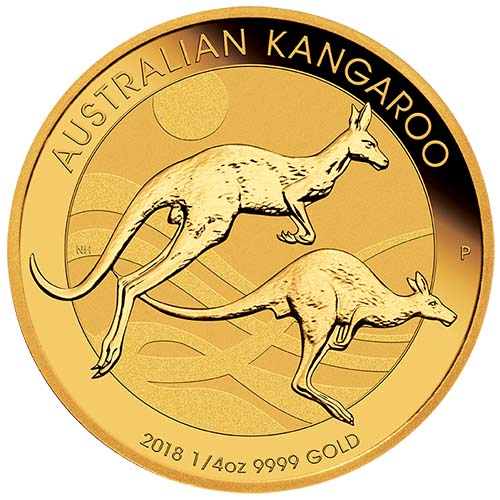 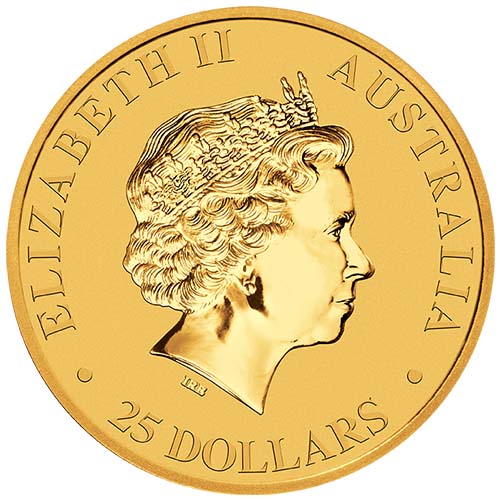 The Australian Gold Kangaroo coin is the oldest gold bullion coin series offered by the Perth Mint. The coins first debuted in 1986 with a design of gold nuggets on the reverse, which was meant to promote Australia’s gold reserves and history of gold rushes. Since 1990, a new design has featured on the reverse depicting the red kangaroo instead. Right now, 2018 ¼ oz Australian Gold Kangaroo Coins are available to purchase online from JM Bullion.

Each 2018 ¼ oz Australian Gold Kangaroo Coin in this product listing is available to you in BU condition. Coins in BU condition exhibit no signs of wear and tear, but minor flaws as a result of the coining process at the mint are possible. These flaws are limited to breaks in the luster, spotted surfaces, and contact marks.

On the obverse of all 2018 Australian Gold Kangaroo Coins is the effigy of Queen Elizabeth II. The portrait of the Queen is captured in right-profile relief, with Ian Rank-Broadley developing this image in 1998 as the fourth-generation portrait of Elizabeth II for use on British and commonwealth coinage.

The reverse of the 2018 ¼ oz Australian Gold Kangaroo Coin features the newest design in the series, that of two red kangaroos. This year’s image depicts the creatures as they hop across a barren landscape somewhere in the rural reaches of the Australian Outback.

The Perth Mint opened in 1899 as a member of the Royal Mint system, joining the Sydney Mint and Melbourne Mint. Today, it is the only remaining facility of the three and is the oldest operating mint in Australia.

If you have any questions, please contact JM Bullion. We’re available at 800-276-6508, online using our live chat, and via email.

Kevin from OK - March 20, 2018
"What a beautiful coin! I buy gold bars mostly, but when I saw this I wanted it now! It is just gorgeous! I will now save my money for a larger version because it's that beautiful! Came in a plastic capsule and that is a plus! Not a flip, a capsule so it can't slide out! The detail is amazing and the older lady on the one side is like reverse proof. One of the kangaroo's on the other is the same way! A great piece of work. I love what Australia has to offer! Such a small coin with such beautiful detail."