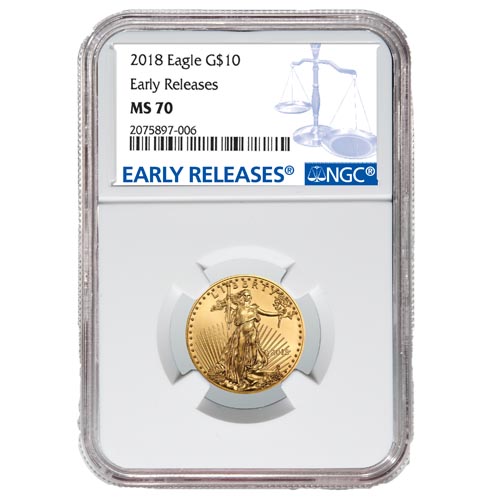 Among the fractional-weight American Gold Eagle coins, the ¼ oz option is often a popular choice with both investors and collectors. Its smaller size makes it easy to store and display, while also providing a more affordable option compared to larger weight gold coins. The 2018 ¼ oz American Gold Eagle Coin is available to you online today from JM Bullion in perfect condition.

Augustus Saint-Gaudens is credited with designing what later became the single greatest coin design in American history. Approached personally by President Theodore Roosevelt in 1905 to lead an effort to redesign American coins for the 20th century, Saint-Gaudens’ Liberty depiction served as the primary design of the $20 Gold Double Eagle from 1907 to 1933.

Saint-Gaudens developed a depiction of Liberty that showed her figure walking forward from the nation’s capital. In her right hand the torch of guiding light, and in her left hand the olive branch of peace. The original design had 46 stars around her figure, representing the number of US states in 1907. Saint-Gaudens would, sadly, die just months before the US Mint released his design.

On the obverse of all American Gold Eagle coins is Saint-Gaudens’ design of Liberty. Her figure was revived by the US Mint for the Gold Eagle Series in 1986. Minor modifications were made to place 50 stars in a circle around her figure. In 1912, the Gold Double Eagle circulation coins were adjusted to feature 48 stars with Arizona and New Mexico joining the Union. The American Gold Eagle has 50 to reflect the subsequent additions of Hawaii and Alaska.

The reverse of all 2018 ¼ oz American Gold Eagle Coins includes a design exclusive to this series. Designed by Miley Busiek, it features a male bald eagle flying over the nest with a female bald eagle guarding the young hatchling below.

All 2018 ¼ oz American Gold Eagles listed here are in perfect condition according to the NGC. Coins with an MS70 grade show full, original mint luster and lack all detracting flaws. The Early Release designation indicates they were received within 30 days of the 2018 release date set by the US Mint.

We encourage JM Bullion customers to contact us with questions. You can reach out to us at 800-276-6508, chat with us live online, or send us an email with your inquiries.