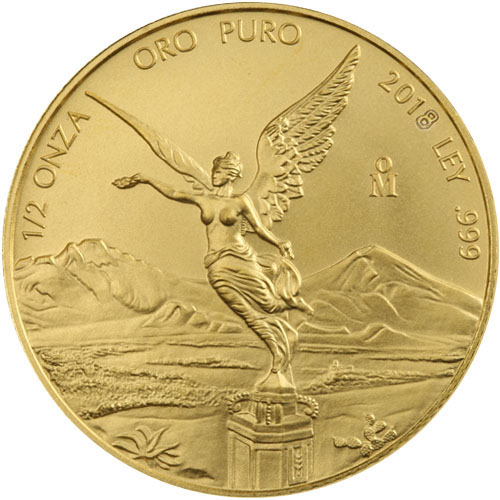 When the Mexican Libertad coin series debuted with gold coins for sale, the oz weight was one of the original options. Introduced in 1981 by the Mexican Mint, the Gold Libertad became just the third gold bullion coin available to investors. However, it would be another decade before the coins were offered after that year, and not until the 21st century that they were annual-release coins. The 2018 oz Mexican Gold Libertad coin is now available to you for purchase online from JM Bullion.

Gold Libertad coins debuted in 1981 with oz and 1 oz gold coins in addition to these oz Gold Libertads. The series was offered just in 1981, and not again until 1991. Even then, the coins were not a mainstay in the precious metals industry. The Gold Libertad bullion coin was available from 1991 to 1994, and again in 2000. Only in 2002 were the coins finally made available on a regular basis.

On the obverse of Mexican Gold Libertad coins is the image of Winged Victory. A symbol important to the Mexican resistance during the nations revolution against Spain, her figure is based upon the goddess of Victory. The Roman mythology deity upon which shes based was altered for Mexico to include a wreath in her right hand and broken chains of servitude in her left.

The reverse of 2018 oz Mexican Gold Libertad Coins features the nations coat of arms. Used by people in the region dating back to the Aztec Empire, the coat of arms depicts a golden eagle as it battles a serpent. The symbolism is meant to connect the resistance of Mexico, as the eagle, to Spain, portrayed by the snake.

With the purchase of a 2018 oz Mexican Gold Libertad Coin in this listing, you receive a gold coin in BU condition. Coins in BU condition have no signs of wear and tear, but are not perfect specimens. There is the potential for breaks in the luster, spotted surfaces, or contact marks.

We encourage JM Bullion customers to contact us on the phone at 800-276-6508 with questions. Please feel free to also reach out to us online using our live chat and email features.