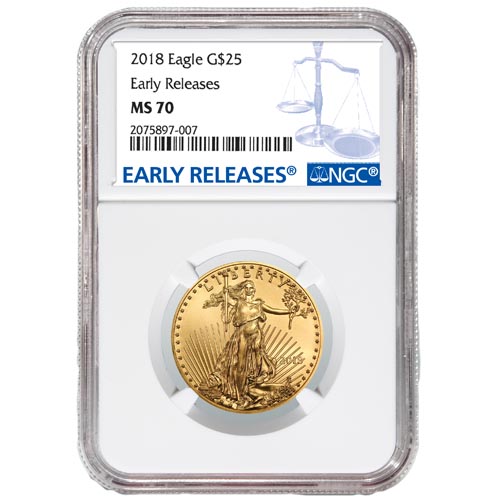 Each 2018 ½ oz American Gold Eagle Coin in this listing is available as a perfect specimen according to the NGC. Coins with a Mint State 70 grade exhibit full, original mint luster and feature no detracting flaws. An Early Release specimen is one that was received by the NGC or an approved third-party depository within 30 days of the 2018 release date set by the US Mint.

American Gold Eagle coins have been available since 1986. Mintage figures for the coins have risen and fallen alongside demand for gold and the price of gold. The highest mintage year for the ½ oz American Gold Eagle came back on its debut in 1986, when 599,566 coins were struck. The lowest mintage figures came in the early 1990s, with 1990 and 1991 issue coins featuring the lowest mintages at 31,000 and 24,100 respectively.

On the obverse of the 2018 ½ oz American Gold Eagle Coin is the image of Liberty originally created by Augustus Saint-Gaudens in 1907. The image appeared on $20 Gold Double Eagle coins until 1933 when the United States ended the issue of gold circulation coins. The image captures Liberty as she walks toward the viewer, with the US Capitol Building visible in the background.

The reverse of the 2018 American Gold Eagle Coin includes the design of a family of nesting bald eagles. One bald eagle is featured flying back to the nest with an olive branch as the other stands watch over the hatchlings in the nest itself.

If you have any questions about these American Gold Eagle coins, please don’t hesitate to ask. JM Bullion customer service is available to you at 800-276-6508, online using our live chat, and via our email address. You can find gold and silver prices today on our website, updated live as they change!