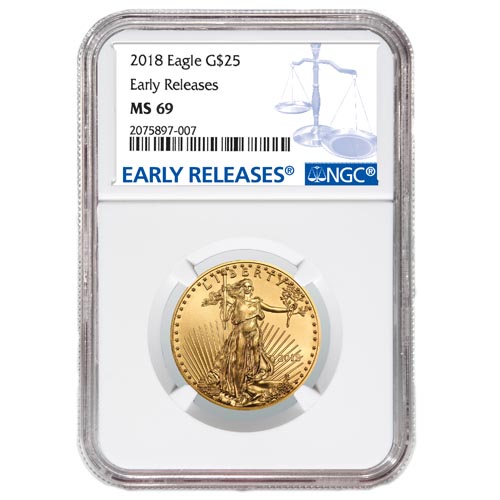 As the official gold bullion coin of the United States, the American Gold Eagle series is a collection of gold coins guaranteed by the federal government to contain the state amount of actual gold weight in Troy ounces. These coins have been available since 1986, and are among the most popular options for gold investors today. The 2018 ½ oz American Gold Eagle Coin is available to you online now from JM Bullion with NGC certification.

On the obverse of the American Gold Eagle Coin you’ll find the image of Liberty. Created in 1907 by Augustus Saint-Gaudens for the Gold Double Eagle, this feature of Liberty captures her figure walking forward from the nation’s capital city with an olive branch in her left hand and a torch in her right.

The reverse of the 2018 ½ oz American Gold Eagle includes a design from Miley Busiek. This design features a large, male bald eagle returning to the family nest with a branch in its talons. A female bald eagle is depicted guarding the nest and its hatchlings in the design.

All 2018 ½ oz American Gold Eagle Coins listed here earned near-perfect grades from the NGC. Coins in Mint State 69 condition show full, original mint luster and a maximum of two minor flaws. These flaws are limited to minuscule hairlines or contact marks. As Early Release specimens, these coins were received by the NGC for grading within 30 days of their 2018 release by the US Mint.

We encourage customers to call JM Bullion with questions at 800-276-6508. You can also connect with us online using our live chat and email features.