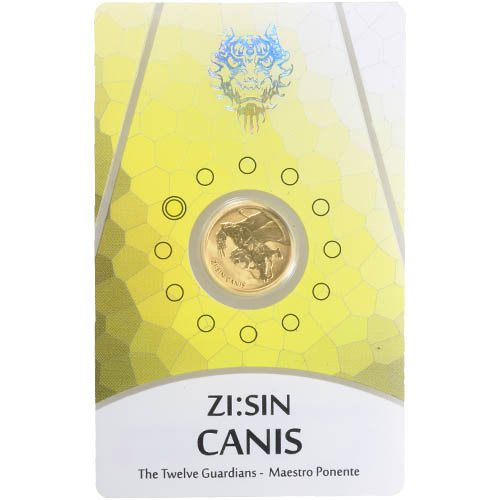 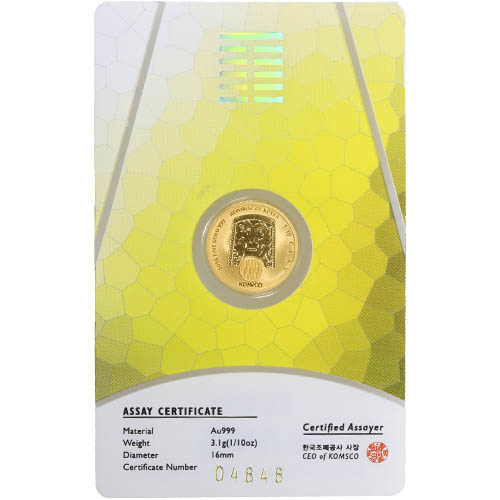 When buying gold from KOMSCO, the number of products is on the increase. The Zi:Sin Series is increasingly popular with investors and collectors for its diversity of designs. Canis was the second release in the collection and featured primarily on 1 oz and 1/10 oz gold medals. Right now, 2018 1/10 oz South Korean Zi:Sin Canis Gold Medals are available to purchase online from JM Bullion.

Each 2018 1/10 oz South Korean Zi:Sin Canis Gold Medal in this product listing comes with a protective assay card. The card includes a gold medal sealed within and denotes the series name and specific release on one side. The other side of the card features the certificate number of the release and the weight, purity, and metal content for the release.

The Zi:Sin Series features 12 distinctive designs, each one representing a different guardian from Gods armies. It is the duty of these individuals to guard the world from all 12 directions to ensure that when evil arises it is met by the forces of good. The guardians are responsible for leading the armies of good when the time arises.

On the reverse of 2018 1/10 oz South Korean Zi:Sin Canis Gold Medals is a depiction of Canis. This guardian is considered the most loyal in the armies of God. Canis can always be found at gods side and is his most trusted warrior. Alert at all times to the potential for danger, Canis is there to stand on the frontline and lead Gods armies as the spearhead of his forces.

The obverse side of 2018 1/10 oz South Korean Zi:Sin Canis Gold Medals includes an image of Do ggae bi. This hobgoblin figure was once used by Korean people to guard against evil spirits in the home as it was believed his grotesque appearance had the power to scare away evil. Chiwoo Cheonwang prominently displayed the image of Do ggae bi on his battle shield to intimidate his enemies in battle.

KOMSCO is the official sovereign mint of the Republic of Korea and is a government-owned corporation. In addition to striking circulation coins and bullion specimens, it also produces paperwork such as passports.