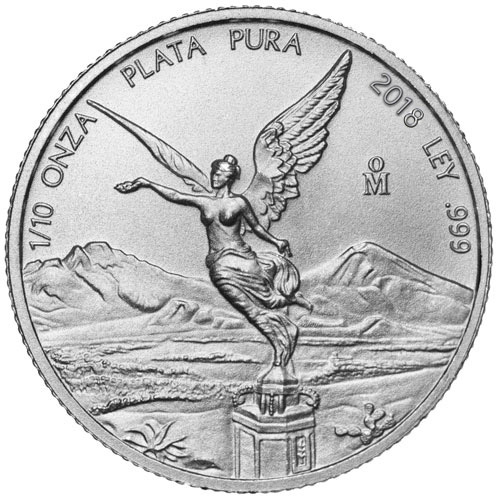 Silver Libertad coins have a complicated coining history. Though introduced in 1982 in 1 oz weight, the Silver Libertad remained available only in that weight for a decade. In 1991, the Mexican Mint introduced four fractional weights into the series. Among those coins was the 1/10 oz Mexican Silver Libertad, as well as a 1/20 oz, oz, and oz coin.

The production of those fractional weights continued from 1991 onward, with further expansion of the program in 1996 to include a 2 oz and 5 oz option above the weight of the 1 oz silver coin. Today, the coins are popular among investors for the design on both sides and the low mintage figures. For example, 2017 1/10 oz Silver Libertads saw just 8,850 coins produced.

On the reverse of 1/10 oz Mexican Silver Libertad Coins is the image of the nations coat of arms. The Mexican coat of arms features a bald eagle on the arm of a cactus, with a serpent clutched in one of its talons and its beak as it battles off the snake. Above is the name of the nation in Spanish with a laurel wreath below to complete the encirclement.

The obverse of the 2018 1/10 oz Mexican Silver Libertad Coin features the images of Winged Victory, Popocatepetl, and Izztacihuatl. Winged Victory is an important symbol to the nation and appears in Mexico City on the Mexican Independence Victory Column. Popocatepetl and Izztacihuatl are twin volcanic peaks outside Mexico City named after a pair of Aztec lovers whose lives ended in tragedy.

Your 2018 1/10 oz Mexican Silver Libertad coin is in BU condition. Coins in BU condition lack any indications of wear and tear from handling, but may feature breaks in the luster, spotted surfaces, or contact marks. These flaws are the result of striking blanks during production.