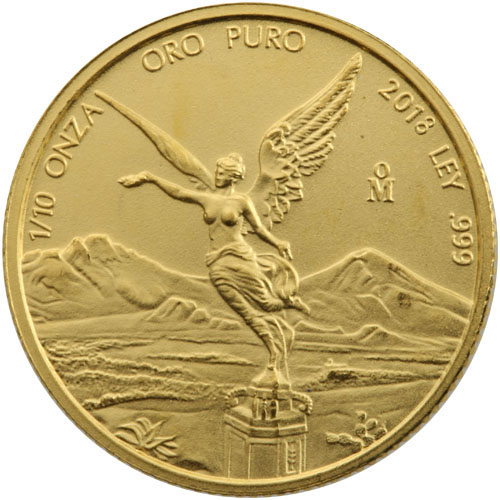 In 1921, the Mexican Mint introduced a gold coin for sale to mark the 100th anniversary of the nations independence from Spanish colonial rule. This coin was known as the Centenario, and it featured the image of Winged Victory on one side with the coat of arms for the nation on the other. Today, 2018 1/10 oz Mexican Gold Libertad Coins are available to you online from JM Bullion.

The Centenario coin was designed by Emilio del Moral for the Mexican Mint in 1921, and its designs were so popular the coin lived beyond its initial 1921-1931 release. The coins returned in 1943 due to high demand for gold coins, and all coins struck from 1947 to 1972 feature a commemorative year of issue of 1947.

Todays Mexican Gold Libertad coins, the official gold bullion coins of Mexico, feature those original designs from the Centenario with minor modernizations to the Winged Victory design. Introduced in 1981, the Gold Libertad was originally available only in , , and 1 oz options. These 1/10 oz Gold Libertads werent introduced until 1991 when the series restarted.

All 2018 1/10 oz Mexican Gold Libertad Coins in this listing feature BU condition. Coins in this condition show no indications of wear and tear from handling, but are not immune to minor flaws from the production process. Common production flaws include breaks in the luster, spotted surfaces, and contact marks.

The obverse of 1/10 oz Mexican Gold Libertad Coins bear the image of Winged Victory in the center, with the twin mountain peaks of Popocatepetl and Iztaccihuatl in the background. Engravings bear the year of issue, weight, purity, and metal content markings for the coin on this side.

On the reverse of the 2018 1/10 oz Mexican Gold Libertad Coin is the coat of arms for Mexico. Based upon designs that have been used in Mexico for centuries, dating back to the Aztec Empires, this imagery features the Golden eagle on a cactus branch with a serpent that it wrestles with its beak and talons in an attempt to control.

The Mexican Mint was founded in 1535 and is located in Mexico City. Controlled by Banco de Mexico and overseen by the federal government, its jobs include the production of bullion coinage, striking of circulation coins, and printing of paper money.

Please dont hesitate to contact JM Bullion with your questions. You can reach out to us at 800-276-6508, chat with us live online, or email us directly.