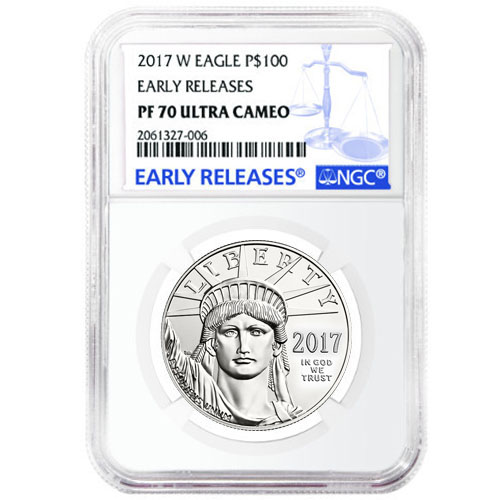 The American Platinum Eagle coin made its debut from the United States Mint on June 6, 1997. The first-ever platinum bullion coin from the US Mint also instantly became the first bullion coin from the facility to feature both a new reverse design each year and a $100 (USD) legal tender face value. Today, the 2017-W 1 oz Proof American Platinum Eagle Coin is available to you online from JM Bullion.

Your 2017-W 1 oz Proof American Platinum Eagle coin from this listing has a PF70 grade from the NGC. Coins in this condition are considered perfect, with full, original mint luster and no detracting flaws of any kind on the surface areas.

As an Early Release specimen, these coins arrived at the NGC within the first 30 days of the 2017 release for Platinum Eagles set by the United States Mint. The UCAM, or Ultra-cameo designation, is for coins with strong, frosted devices and a deeply-mirrored, clear background field.

On the obverse youll find the familiar face of the Statue of Liberty, created for this coin program in 1997 by former Chief Engraver of the United States Mint, John Mercanti. It depicts only her face, with engravings of Liberty, E Pluribus Unum, the year of issue and the national motto.

The reverse of the 20th anniversary 2017-W 1 oz Proof American Platinum Eagle features the original proof design from 1997 created by Thomas D. Rogers. It depicts the American bald eagle flying over the nation with the rising sun at its back. A W mint mark is included on this face just off the eagles wing below the purity, metal content, and weight engravings.

Please dont hesitate to contact JM Bullion with questions. You can reach our customer service team on the phone at 800-276-6508, online using our live web chat, or by sending us an email with your inquiries.