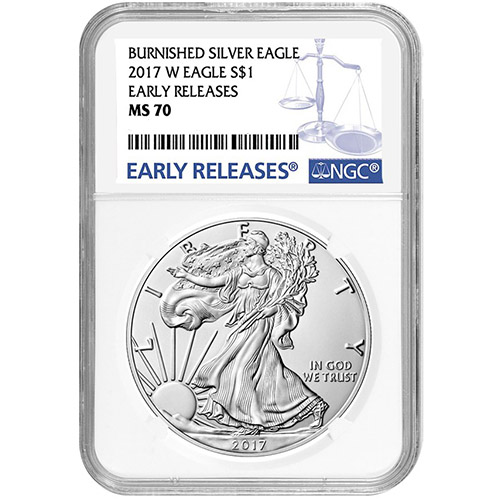 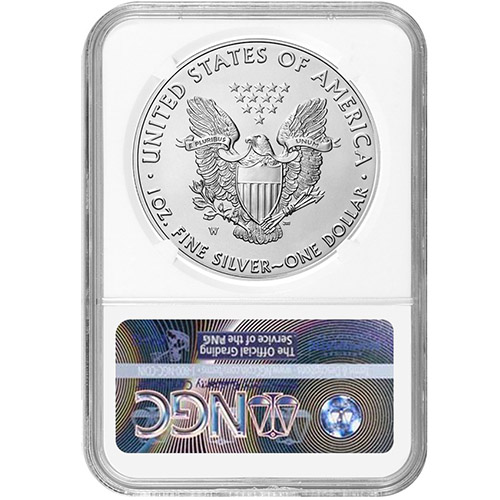 The Burnished American Silver Eagle coin is given special treatment from start to finish during the coining process at the mint. The silver blanks start the production process inside of drums where they are polished using steel balls as a medium to buff the blanks. Each one is then removed by hand, placed in a coining press, struck, and removed again by hand and sealed immediately.

As a result of this unique coining process, the Burnished Silver Eagle coins have a distinct luster and beautiful finish that sets them apart from both the bullion and proof versions of the Silver Eagle. These coins are particularly ideal for those numismatists who covet coins worthy of display or even want to showcase their coins at local shows.

Each 2017-W 1 oz Burnished American Silver Eagle Coin listed here is in perfect condition. The NGC bestows a Mint State 70 grade to coins with full, original mint luster and no detracting flaws of any kind. Early Release stands for coins that were received for certification by the NGC within 30 days of the US Mint’s initial release.

On the obverse of all Silver Eagles is Walking Liberty. Created in 1916 by Adolph A. Weinman, her figure is shown walking toward the setting sun with the American flag draped over shoulders as a symbol of the nation’s consistent march toward a brighter future.

The reverse of the 2017-W 1 oz Burnished American Silver Eagle includes the heraldic eagle of the United States. John Mercanti refined this latest depiction of the national shield with a bald eagle featured behind the heraldic shield, arrows and an olive branch in its talons, and a cluster of 13 stars in a tight triangle above.

Please direct your questions to a JM Bullion associate. We’re available at 800-276-6508, online using our live chat, and via our email address.