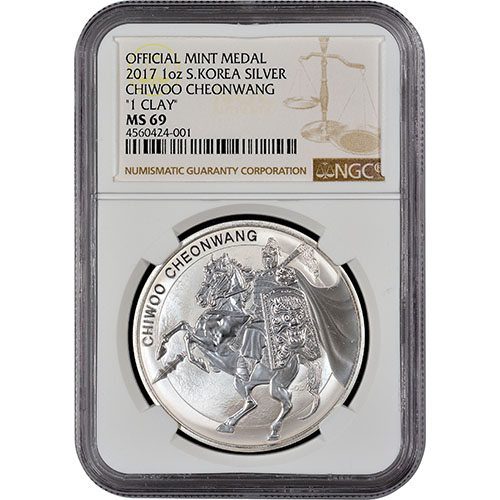 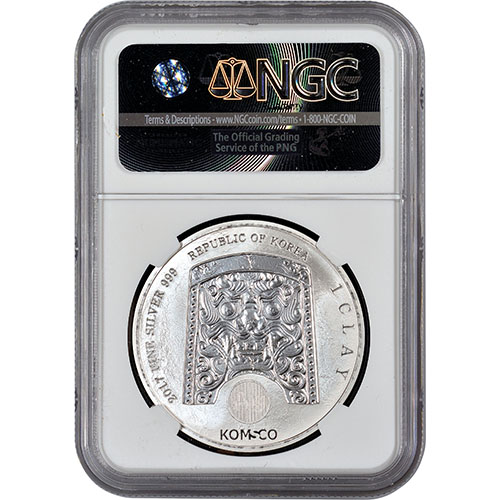 Chiwoo Cheonwang is a symbol of South Korea that is often depicted solely using his fearsome mask. In Korean lore, the legend of Chiwoo Cheonwang is that of the God of War. He is said to wear a demon-like mask and cast magical spells on individuals while yielding his large shield. Some say his powers include the ability to control the weather.

The obverse of the 2017 issue of these silver coins mirrors the first year’s issue. You’ll find the impressively detailed image of Cheonwang’s fearsome mask, with engravings of the year of issue, metal content, weight, and nation of issue.

On the reverse of the Chiwoo Cheonwang Silver coin for 2017 is a slight variation to the original design. The returning features include that of Chiwoo Cheonwang in his full armor with his mask on while he holds onto a large shield and spear in either hand, with his body featured riding atop a massive warhorse.

Each of the 2017 1 oz South Korean Silver Chiwoo Cheonwang coins in this product listing are certified Mint State 69 by the NGC. Coins with an MS69 grade are considered near-perfect specimens, with full, original mint luster and a maximum of two minor detracting flaws on the surface areas.

KOMSCO was founded through full investment from the National Treasure of South Korea under a special law enacted in 1951. Today, the mint is the sole currency manufacturer for the Republic of Korea, and it operates under the direct control of the government in Seoul.

We encourage all JM Bullion customers to contact us at 800-276-6508 with questions. You can also connect with us online through our live chat and email address, or visit our website to view our entire catalog of silver for sale.