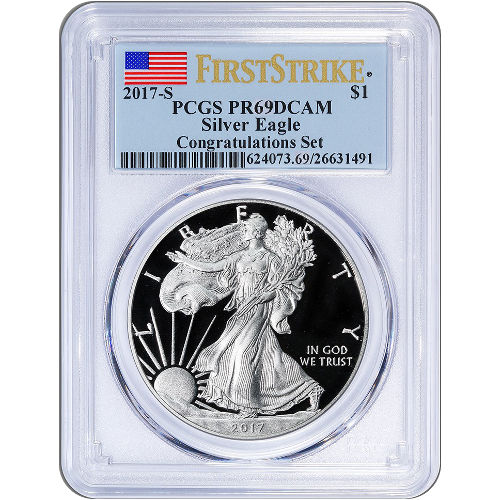 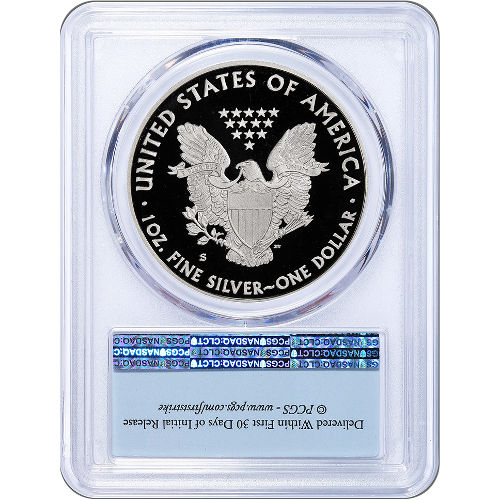 Each of these 2017-S Proof American Silver Eagle coins is available in near-perfect condition from the PCGS. Coins in PR69 condition exhibit full, original mint luster, but also feature a maximum of two minor detracting flaws such as minuscule hairlines. All flaws are found outside the primary focal areas of the coin.

First Strike coins are those which arrive at the PCGS or an approved third-party depository for certification within the initial 30-day release window as set by the United States Mint. The DCAM, or deep-cameo, designation on these coins highlights the strong, frosted matte finish on the design sets and the deeply-mirrored, clear background field of the coin.

On the obverse of each Proof American Silver Eagle coin you’ll find the image of Walking Liberty. Her depiction is meant to symbolize the nation’s march toward a brighter future and is captured through her appearance with the American flag over her shoulder as she walks toward the setting sun.

The reverse of the 2017 American Silver Eagle bears the heraldic eagle of the United States. This image has been in use on American coinage since 1794, but this particular design is a 1986 modernization from John Mercanti, Chief Engraver of the United States Mint from 1986 to 2010.