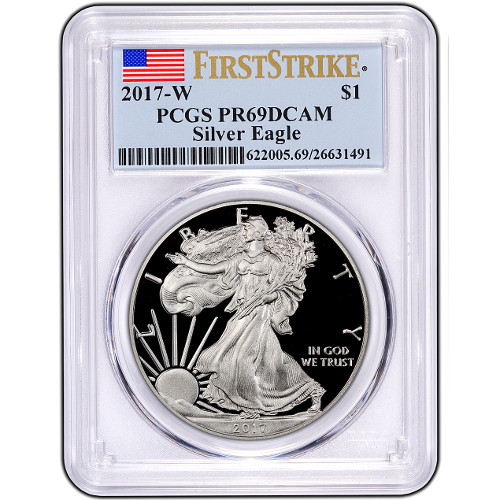 The American Silver Eagle coin was introduced in 1986 as the official silver bullion coin of the United States. Originally available only in bullion and proof, the program expanded in 2006 to include the regular production of a burnished coin. Although the burnished coin is also aimed toward the attention of collectors, the proof remains the more popular choice among the two.

All 2017 Proof American Silver Eagles in this listing have PR69 grades from the PCGS. Coins in this condition exhibit full, original mint luster, but also feature a maximum of two minor detracting flaws such as minuscule hairlines. All flaws are found outside the primary focal areas of the coin.

First Strike coins are those which arrive at the PCGS or an approved third-party depository for certification within the initial 30-day release window as set by the United States Mint. The DCAM, or deep-cameo, designation on these coins highlights the strong, frosted matte finish on the design sets and the deeply-mirrored, clear background field of the coin.

We encourage all JM Bullion customers to contact us with questions. You can call our customer service team at 800-276-6508, chat with us live online, or simply send us an email.