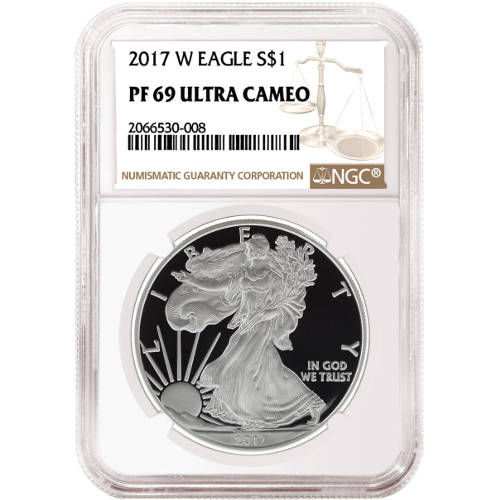 Each of the 2017 Proof American Silver Eagles for sale in this listing is a near-perfect proof specimen according to the NGC. Coins with a PF69 grade have full, original mint luster, but also feature a maximum of two minor detracting flaws. These flaws are limited in scope to miniscule hairlines or contact marks, and found only outside the primary focal areas of the coin.

The Ultra-cameo, or UCAM, designation is reserved for proof coins with an especially beautiful finish. Coins in this condition exhibit strong, frosted matte finishes on the design features and a deeply-mirrored, clear background field.

American Silver Eagle coins are the official silver bullion offering of the United States Mint. The 2016 issue of the Proof Silver Eagle marked the coins 30th anniversary with the inclusion of a first-ever edge lettering on the coins that read 30th Anniversary.

Though that edge lettering is gone for 2017, the coins remain immensely popular. Final mintage for the 2016 Proofs is unknown to date, but opening sales reached 322,317. That figure is nearly 60,000 more than the opening sales for 2015 issued Silver Eagle proofs.

On the obverse of all 2017 American Silver Eagle coins youll find the image of Walking Liberty. Created in 1916 by Adolph A. Weinman, her figure is meant to reflect the nations constant drive toward a brighter future as she walks toward the setting sun with the American flag around her shoulders.

The reverse of Proof Silver Eagle coins includes the heraldic eagle design. Originally used in 1794 on the first coins struck at the Philadelphia Mint, this image is the latest incarnation of the Heraldic Eagle of the United States, and was created by former US Mint Chief Engraver John Mercanti.

If you have any questions, please dont hesitate to ask. JM Bullion customer service is available to you online at 800-276-6508. You can also connect with us online through our live chat and email address.