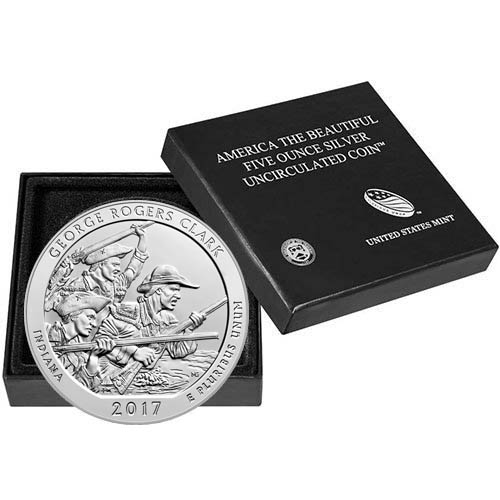 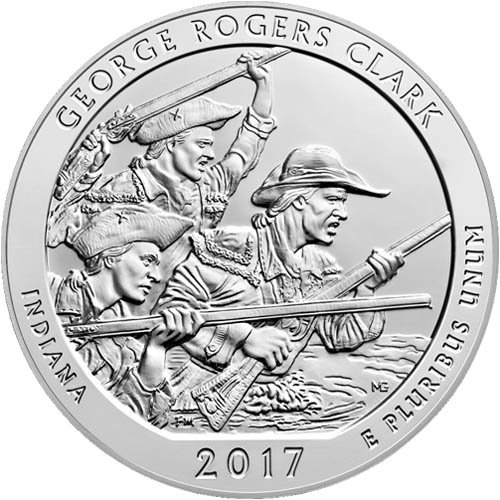 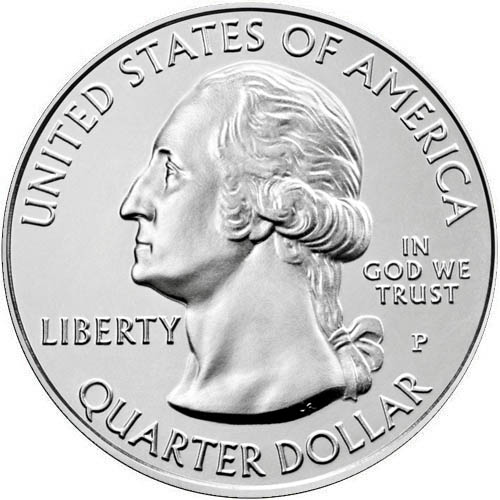 Each 2017-P 5 oz Burnished ATB George Rogers Clark National Historical Park Silver Coin is individually packaged inside of a United States Mint presentation case. The Burnished Silver ATB coins come with a Certificate of Authenticity from the US Mint.

Burnished Silver ATB coins have different visuals than the bullion version of the coins. The US Mint vapor blasts the coins after striking to create a matte finish, which is different from the shinier finish found on the bullion coins.

The Illinois Campaign during the Revolutionary War took place in 1778 and 1779, and Lt. Col. Clarks victory in the campaign would remain one of the lasting memories of the war in American hearts and minds after the young nation earned its independence. Lt. Col. Clark led his forces on a winter march along the frozen Missouri River to launch a surprise attack on the British at Fort Sackville, forcing the surrender of British forces there under the command British Lt. Governor Henry Hamilton.

On the reverse of the 2017-P 5 oz Burnished ATB George Rogers Clark National Historical Park Silver Coins is the image of Lt. Col. Clark leading his men across the marsh flats to attack the British position at Fort Sackville.

The obverse of 2017 Burnished ATB George Rogers Clark National Historical Park Silver Coins is a depiction of President George Washington. A Revolutionary War hero himself, Washington was the Commander-in-Chief of the Continental Army and went on to serve two terms as the first-ever President of the United States of America.

All Burnished Silver ATB Coins have mint marks, unlike the silver bullion versions. On the obverse field, you will find a P mint mark from the Philadelphia Mint below the national motto of In God We Trust.