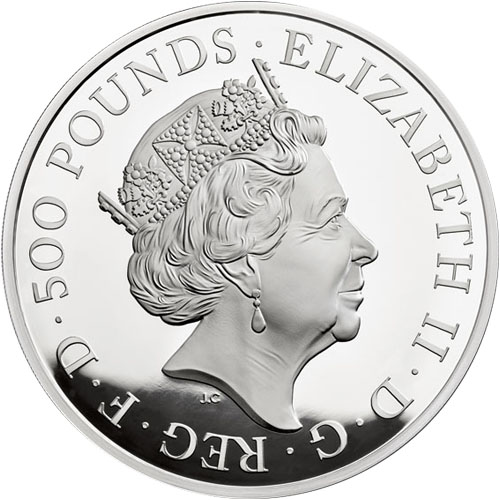 With a total of 10 designs, the Queens Beast Series from the Royal Mint is an exciting option for any precious metal enthusiasts. There are a dizzying array of options in this collection, which includes silver, gold, and platinum coins available in both bullion and proof options. The 2017 1 Kilo Proof British Silver Queens Beast Unicorn Coin is available to you today online from JM Bullion.

The Queens Beast Series will eventually feature depictions of all 10 statues of heraldic beasts that appeared at the 1953 official coronation ceremony of Queen Elizabeth II. The proof series released the Unicorn of Scotland in an order that breaks with the bullion issue of the coins.

Bullion coins in the Queens Beast Series opened with the Lion of England, Griffin of Edward III, and the Red Dragon of Wales. The proof coins skipped to the fourth design with this second release in the series using the Unicorn of Scotland instead. Proof coinage in the collection is extremely limited, with a total of 225 1 Kilo silver coins, just 100 of which are available for individual purchase.

The obverse of all 2017 1 Kilo Proof British Silver Queens Beast Unicorn Coins features the right-profile portrait of Queen Elizabeth II. Created by Jody Clark in July 2015, it is the fifth-generation image of Her Majesty to appear on British coinage. At 33 years of age, Clark is the youngest Royal Mint engraver ever to create Her Majestys effigy.

On the reverse of your Proof British Silver Queens Beast Unicorn Coin is the Majestic Unicorn of Scotland. The mythical beast was chosen by William I in the 12th century when he created a coat of arms for the Scottish kingdom. It was adopted later by James I of England when the thrones of England and Scotland were united as the United Kingdom.

Your Queens Beast Unicorn Coin is struck by the Royal Mint, the United Kingdoms sovereign mint and one of the worlds oldest operating mint systems. The proof coins in this collection ship inside of Royal Mint display boxes.

We encourage all JM Bullion customers to contact us with questions. You can reach our team at 800-276-6508, chat with us live online, or simply send us an email. Dont forget to browse our full collection of silver for sale online at any time!