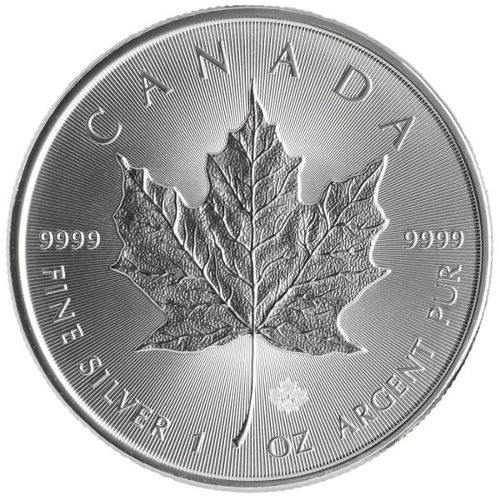 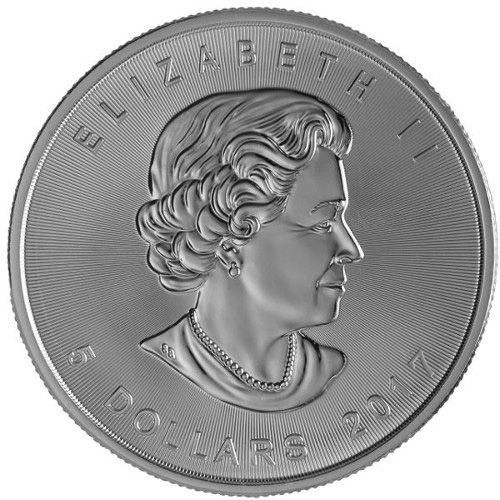 Canadian Silver Maple Leaf coins share the same design features of the Gold Maple Leaf, which was introduced nine years earlier. The Silver Maple Leaf has undergone fewer changes in its history than the gold version. For example, it has always featured .9999 pure silver while the gold debuted in just .999 purity.

Conversely, the Silver Maple Leaf has less variety, being offered only in a 1 oz weight while the gold has a 1 oz and four fractional-weights. The reverse and obverse design sets are shared by both coins and never change from one year to the next.

The obverse of the 2017 Canadian Silver Maple Leaf Coin features the 2003 depiction of Queen Elizabeth II created by Susanna Blunt. This image debuted on the Silver Maple Leaf in 2004, and is the third to appear after Arnold Machin’s depiction (1989-90) and Dora de Pedery-Hunt’s version (1990-2003).

On the reverse is the sugar maple leaf design created by Royal Canadian Mint engravers. The official emblem of Canada, the maple leaf is used by sporting teams across the nation and appears at the center of the national flag.

Each 2017 Canadian Silver Maple Leaf listed here today is in BU condition. Coins in this condition have no signs of wear and tear, however you may notice minor flaws ranging from breaks in the luster and spotted surfaces to contact marks from striking the blanks during the production process.

The Royal Canadian Mint was founded in 1908 as the sovereign mint of Canada, relieving the Royal Mint of London of its duties in striking Canadian currency. Today the mint operates its original headquarters in Ottawa and a newer facility in Winnipeg.

Please feel free to reach out to JM Bullion customer service at 800-276-6508, chat with us live online, or send us an email with your inquiries.

RICHARD from SC - July 31, 2017
"Arrived today, and added to my world collection !! These are beautiful coins and are always a good investment. I was happy to add them to my World Collection of coins, and as always JMB is my precious metal and coin dealer !!"

Todd from NC - April 22, 2017
"Picked up some tubes and must say just awesome. ASE are nice but overrated in my opinion. Maples are more pure and much cheaper. Great job JMB."

Erik from KS - February 28, 2017
"Without question the Canadian Maple Leaf coin is my personal favorite coin. Breath taking beauty as if it were a piece of art. I add two or three to my collection each month with my order. And a big Thank You to JM Bullion for making it possible. An awe striking coin and I look forward to placing my next order. Erik W."

John D. from PA - February 18, 2017
"The Canadian silver maple leaf is a superb coin. Their .9999 purity is the highest in the world. With their security features, it makes them hard to fake. JM Bullion always has the best price on them in smaller quantities for us that can not afford a monster box of 500. I will continue to buy them from JMB when the new year comes out. The 2017 coin has no changes from the 2016 coin, except the year of course. If you don't own any of these, try them out, they are a great coin to have."