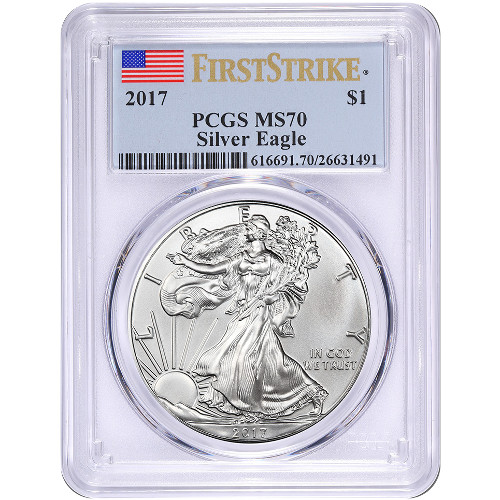 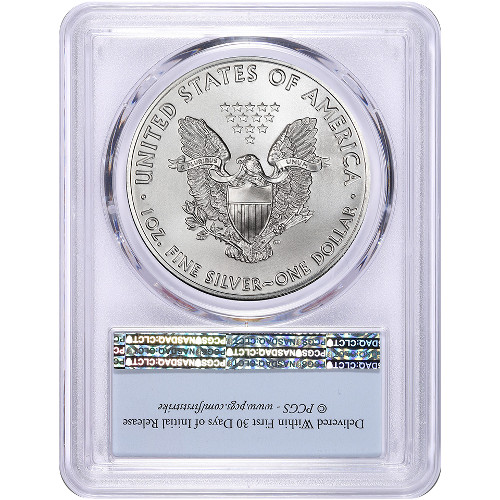 American Silver Eagles are perennial stars of the precious metals marketplace. The official silver bullion coin of the United States, the Silver Eagle is part of the larger American Eagle collection from the US Mint that features a Gold Eagle counterpart in four weights and the Platinum Eagle coin with ever-changing reverse designs in proof. Right now, the 2017 1 oz American Silver Eagle Coin is available to purchase online from JM Bullion.

The 2017 1 oz American Silver Eagle Coins available to you here today are considered perfect specimens. Graded Mint State 70 by the PCGS, these coins exhibit full, original mint luster and lack all detracting flaws on the surface areas of the coin.

First Strike coins are those which have arrived for certification at the PCGS within a set timeframe. In order to qualify, these American Silver Eagle coins must have arrived at the PCGS or an approved third-party depository within 30 days of the release date set for 2017 issue coins from the United States Mint.

On the obverse of the 2017 1 oz American Silver Eagle is the image of Walking Liberty. Originally created in 1916 by Adolph A. Weinman, this depiction of Liberty shows her figure walking toward the setting sun with the American flag draped across her shoulders. Designed to depict America’s constant drive toward a brighter future, this image appeared on the Walking Liberty Half Dollar from 1916 to 1947.

If you have any questions about these 2017 American Silver Eagle coins, we encourage you to reach out to JM Bullion. Our customer service team is available at 800-276-6508, online using our live web chat, and via our email address.