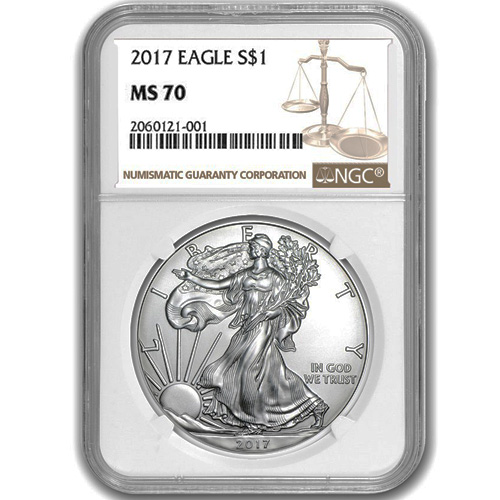 American Silver Eagle coins were introduced by the United States Mint for the first time in 1986. Congress passed the Liberty Coin Act in 1985, authorizing the Treasury Department and the US Mint to produce an official silver bullion coin for the nation.

All 2017 American Silver Eagle Coins in this product listing are considered perfect specimens by the NGC. Graded by the professionals at the NGC, these coins are guaranteed to exhibit full, original mint luster and lack any detracting flaws on the surface areas of the coin.

On the obverse of all American Silver Eagle coins is the image of Lady Liberty as created by Adolph A. Weinman. First featured on the Walking Liberty Half Dollar from 1916 to 1947, Weinmans depiction features Lady Liberty striding forward toward the setting sun, and is symbolic of the nations drive toward a brighter future.

The reverse features the image of the heraldic eagle. Designed by John Mercanti in 1986 for the American Silver Eagle, this creation features the bald eagle set behind a shield, with arrows in one talon and an olive branch in the other.

All American Silver Eagle bullion coins struck by the United States Mint in the modern era are produced predominantly at the West Point Mint, with supplemental production of bullion coins only taking place at the San Francisco Mint as well.

Please direct your questions to a JM Bullion associate. Were available at 800-276-6508, online using our live chat, and via our email address.