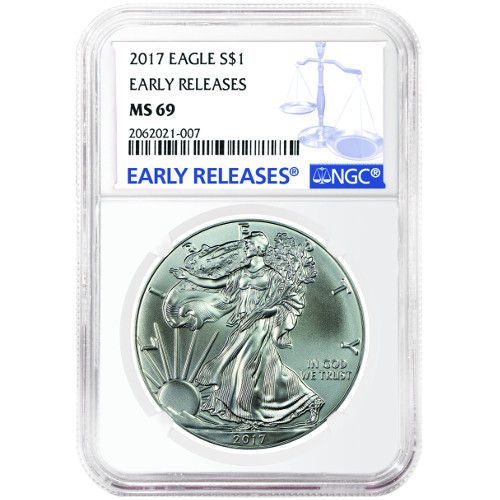 Each of the 2017 1 oz American Silver Eagle Coins in this release is in near-perfect condition. Coins in MS69 condition exhibit full, original mint luster, but also feature a maximum of two minor detracting flaws such as minuscule hairlines or contact marks. Each flaw is located outside the primary focal area of the coins surfaces.

The Early Release designation is reserved for coins received by the NGC within a certain time window. In order to qualify, these 2017 1 oz. American Silver Eagle coins had to arrive at the NGC or an approved-third party depository within the first 30 days of the release date set for 2017 issue coins by the United States Mint.

On the reverse of the American Silver Eagle is the heraldic eagle of the United States. In use on American coinage since 1794, this current generation image was created in 1986 by then-Chief Engraver of the United States Mint, John Mercanti, who held the post from 1986 until his retirement in 2010.

The obverse of all 2017 American Silver Eagle coins includes the Walking Liberty image. Designed in 1916 by Adolph A. Weinman, it is considered one of the finest coin designs in American history and originally appeared on the Walking Liberty Half Dollar from 1916 to 1947.

All 2017 1 oz American Silver Eagle coins are a product of the United States Mint, and produced by the mint at its West Point Mint facility in the state of New York.

If you have any questions, please dont hesitate to ask. JM Bullion associates are available on the phone at 800-276-6508, online using our live web chat, and via our email address.