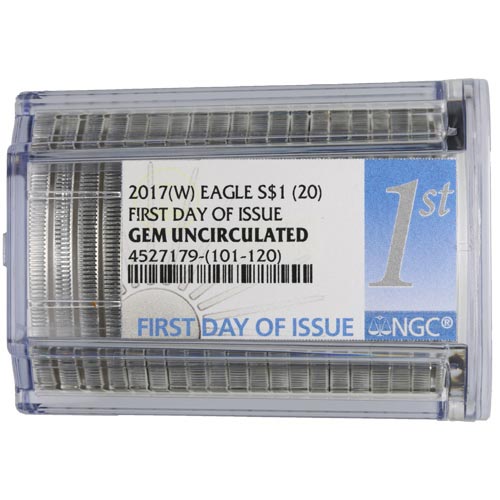 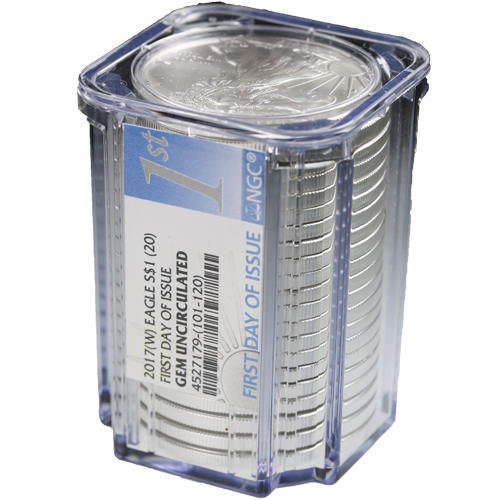 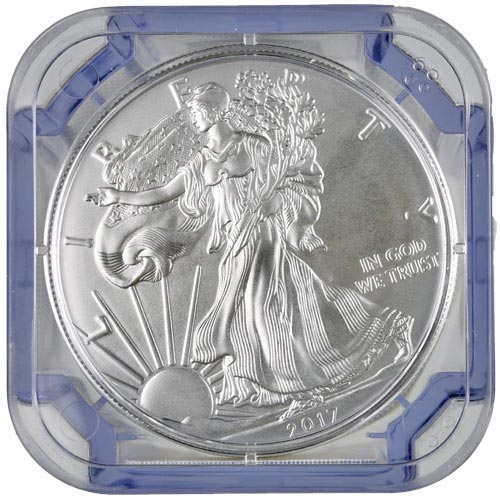 The American Silver Eagle coin is highly coveted among investors. The official silver bullion coin of the United States, each one has its silver content and face value backed by the faith of the US federal government. Today, the 2017 American Silver Eagle Coin is available in an NGC Gem Roll from the First Day of Issue collection, and is yours from JM Bullion.

Each of these 2017 American Silver Eagle rolls contains a total of 20 individual 2017 Silver Eagles. The Numismatic Guaranty Corporation, one of the two most reputable coin certifying companies in the world, has judged the coins inside to be in Gem condition. This means each coin is in BU condition.

Coins in BU condition exhibit no signs of wear and tear on the surface areas. However, you may notice the presence of minor flaws ranging from breaks in the luster and spotted surfaces to contact marks from the coining process at the United States Mint.

American Silver Eagle coins have been a fixture of the precious metals marketplace since their 1986 introduction. While the popularity of the coins ebbed and flowed through its early history, recent years have seen the coin enjoy unprecedented levels of demand. 2014 saw a record sales year of 44 million coins, while 2015 broke that record with 47 million coins sold.

On the obverse face of the 2017 American Silver Eagle coin is Adolph A. Weinmans Walking Liberty design. In Weinmans design, Walking Liberty is featured in full-length figure, with the American flag draped over her shoulders as she walks toward the setting sun, a symbol of the nations constant strive for a brighter future.

The reverse side includes US Mint Chief Engraver John Mercantis heraldic eagle depiction. Mercantis design shows a bald eagle set behind a heraldic shield, clutching arrows and an olive branch in its talons, with 13 stars arranged in a triangle above its head to honor the original American Colonies.

All coins in this NGC Gem Roll are guaranteed First Day of Issue coins. This means these 2017 Silver Eagles were released for sale on the very first day of availability for the 2017 release.

Please dont hesitate to reach out to JM Bullion with any questions you might have regarding this 2017 American Silver Eagle NGC Gem Roll. You can reach us on the phone at 800-276-6508, connect with us online using our live chat, or email us directly. You can also get gold and silver prices today online at our website!