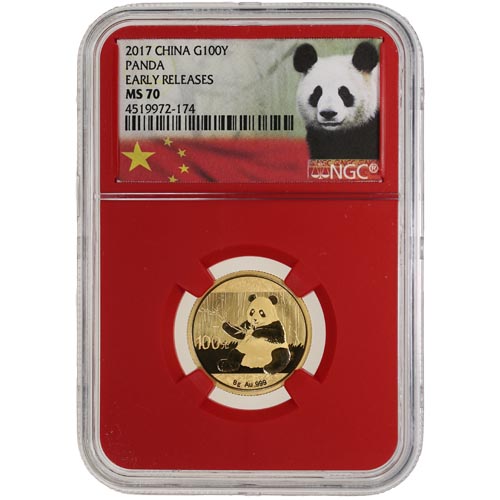 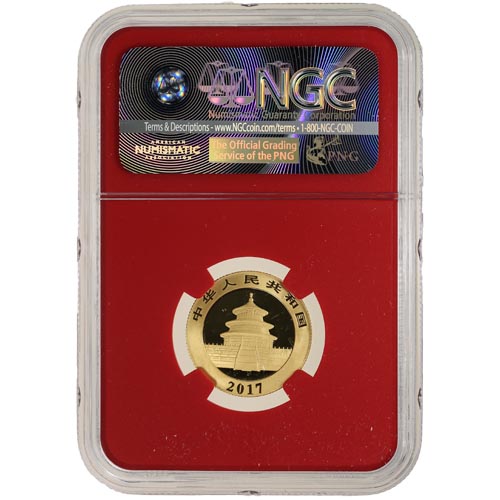 Chinese Gold Panda coins represent one of the longest running gold bullion coin programs in the world today. Introduced in 1982, these coins have set a number of firsts in the precious metals industry throughout 35 years of availability. Today, 2017 8 Gram Chinese Gold Panda Coins are available to you online from JM Bullion with perfect certification from the NGC.

The Chinese Gold Panda coin has set two important firsts in the precious metals industry. The first of these came in 1982 when it debuted as the first major gold bullion coin program to feature rotating annual designs on one side of the coin. Previous debuts of the South African Gold Krugerrand and Canadian Gold Maple Leaf use the same design each year.

Secondly, and more recently, the Gold Panda became the first major bullion coin program to abandon Troy ounces as its marked unit of weight. The Chinese government converted the Gold and Silver Panda coins to Grams for markings starting in 2016.

Each 2017 8 Gram Chinese Gold Panda Coin in this listing is available with a perfect Mint State 70 grade from the NGC. Coins in this condition have full, original mint luster and lack any detracting flaws. As Early Release coins, the NGC guarantees the coins were received for certification within the first 30 days of their 2017 issue date by the Chinese Mint.

Additionally, these 2017 8 Gram Chinese Gold Panda Coins arrive inside of the NGCs famed protective plastic slabs. This time however, youll find a vivid red core label inside of the crystal-clear slab with EdgeView holder technology.

On the obverse of all 2017 Chinese Gold Panda Coins is the depiction of the panda. This native bear species is found throughout the central highlands of China, and is depicted on this years design sitting on a branch as it gnaws on some bamboo.

The reverse of all 2017 8 Gram Chinese Gold Panda Coins features the Temple of Heaven design. Used since 1982, this image depicts the faade of the primary building in a religious and social complex erected during the 15th century in south-central Beijing.

Please feel free to call JM Bullion at 800-276-6508 with questions. You can also reach out to us online through our live web chat and email address.