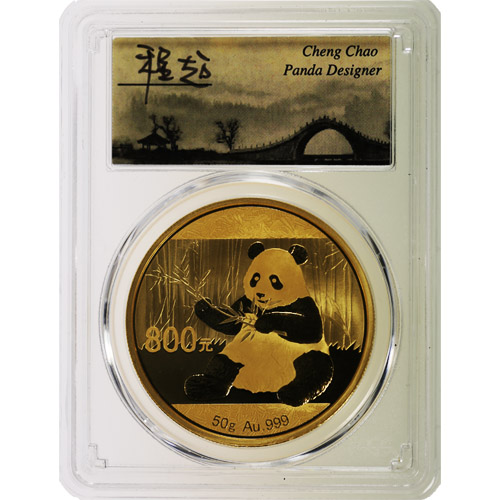 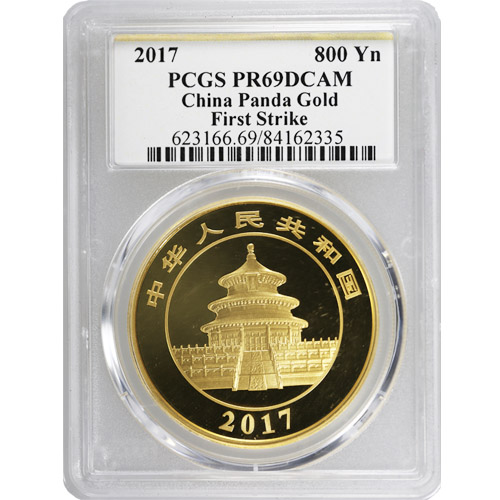 Introduced in 2016, the Proof Chinese Gold Pandas from the Chinese Mint celebrate the annual designs in the series with beautiful relief and stunning finishes. The 2017 release marks the second version of the coins and bears the same design featured on BU coins from 2017. Now, 2017 50 Gram Proof Chinese Gold Panda Coins in near-perfect condition are available to you for purchase online from JM Bullion.

In the obverse design of the 2017 50 Gram Proof Chinese Gold Panda Coin is a depiction of the Hall of Prayer for Abundant Harvests. This design element has featured on the obverse of the Gold Pandas every year since 1981 when the series launched.

For the reverse field of 2017 Proof Chinese Gold Panda Coins, you will find a unique design used only in 2017. The design shows a Giant Panda seated on its backside as it manipulates a bamboo shoot in its paws.

These 2017 50 Gram Proof Chinese Gold Pandas come with a near-perfect certification from the PCGS. A PR69 coin showcases full, original mint luster and has a maximum of two minor detracting flaws. These flaws must be located outside of the primary focal points of the coin. The DCAM designation indicates the coins have strong, frosted designs and deeply-mirrored, clear fields. The First Strike designation means the coins were received for grading within 30 days of the initial release.