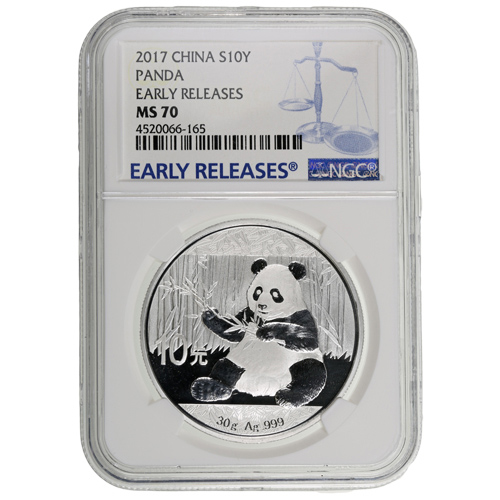 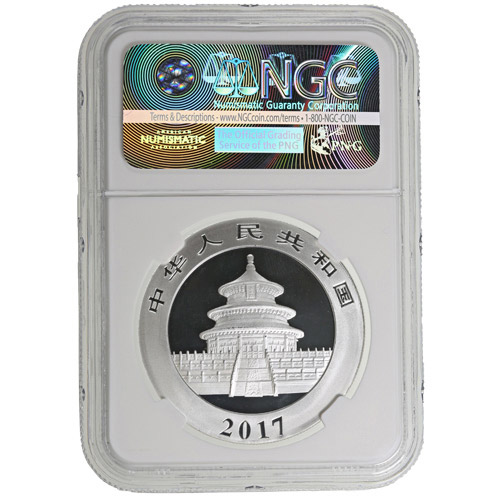 Throughout the history of the Chinese Panda series from the Chinese Mint, a new design has featured on the obverse side of the coin in every year except for the 2001 and 2002 releases which used the same design in both years.

All 2017 30 Gram Chinese Silver Panda Coins in this product listing from JM Bullion are available in Mint State 70 condition. Coins in this condition exhibit full, original mint luster and lack all detracting flaws on the surface areas. Early Release coins are those which arrive at the NGC or an approved third-party depository within the first 30 days of the 2017 release date, as set by the Chinese Mint.

On the obverse of the 2017 30 Gram Chinese Silver Panda is the newest panda design from the Chinese Mint, which depicts a large panda sitting on its hind quarters as it eats some bamboo shoots. The typical engravings and design features included again this year feature the bamboo wall in the background, and the face value of the coin in Yuan.

All Chinese Silver Panda Coins are produced by the Chinese Mint. Operating numerous mints throughout the country, the Chinese Mint does not use mint marks on any of its coins, making it impossible to identify the mint of origin for any of its products.

Please direct your questions about the Chinese Silver Panda to a JM Bullion customer service associate. You can contact our team on the phone at 800-276-6508, connect with us online through our live chat, and email us.