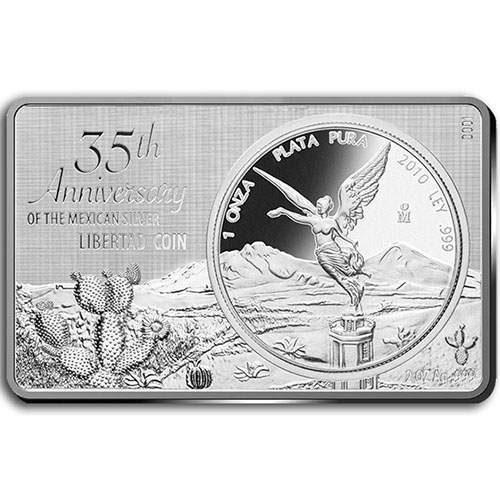 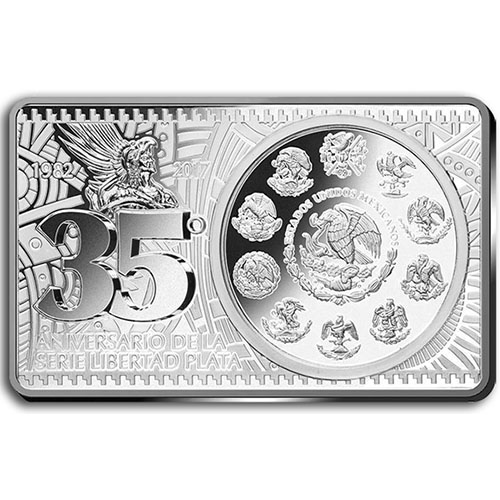 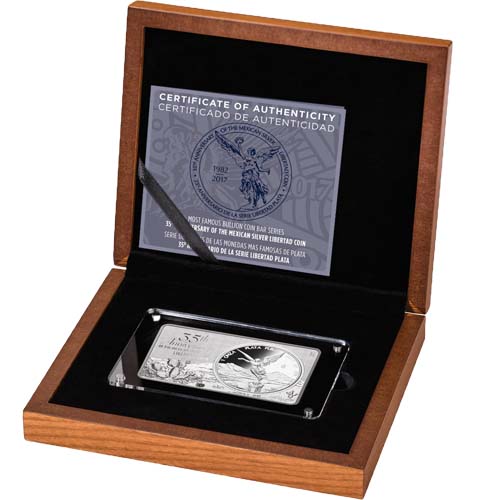 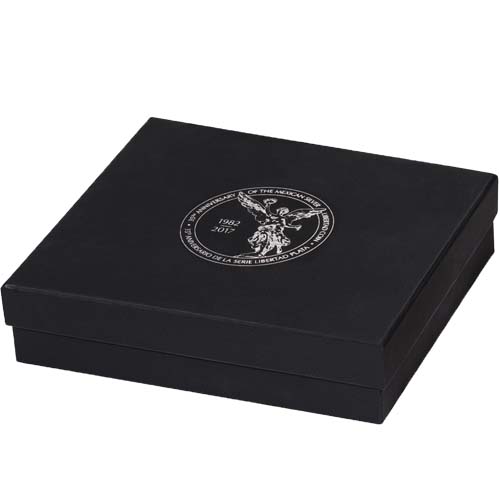 Released for the first time in 1982, the Mexican Silver Libertad is one of the most popular silver coins for sale in the precious metals industry right now. Thought its global profile is massive, one thing that sets the Silver Libertad apart from other coins is its extremely low bullion mintage figures, generating intense interest for the coins with each annual release. The 2017 3 oz 35th Anniversary Mexican Libertad Silver Bar is available to you online today from JM Bullion.

Introduced in 1982 by the Mexican Mint and Banco de Mexico, the Mexican Silver Libertad coin has grown over time to become one of the most unique offerings in the silver industry. Precious metal enthusiasts will note that the Silver Libertad is one of only a handful of silver bullion coins available with no set face value on the coin.

These 2017 3 oz Mexican Libertad Silver Bars are a celebration of the 35th anniversary of the coin programs debut in silver. The product actually includes two pieces in total. There is a 2017 1 oz Mexican Silver Libertad coin included that is set within the design of a 2 oz silver bar.

The reverse of all Silver Libertad coins in this weight include the modern coat of arms for Mexico in the center, with an encircling design that features the 10 historic versions of the coat of arms used since the nation gained independence from Spain.

On the obverse of the silver bar itself youll notice the coin integrates beautifully into the design of the bar. The twin volcanic peaks of Popocatepetl and Izztacihuatl featured in the background of the coin expand and bring a greater view of the Mexican desert to life on the silver bar.

The reverse side of the silver bar has an intricate design based upon Aztec symbolism and includes engravings marking the 35th anniversary, as well as the dates 1982 and 2017. The individual 3 oz 35th Anniversary Mexican Libertad Silver Bars ship inside of clear plastic capsules housed in wooden display boxes.

We encourage all JM Bullion customers to contact us at 800-276-6508 with questions. You can also contact us online using our live chat and email address.

Camille from NY - June 13, 2018
"One of the most elegant bars out of all the 3oz bars offered here. Great detail and shine, and the presentation package is beautiful! You have to own one of these beauties!"