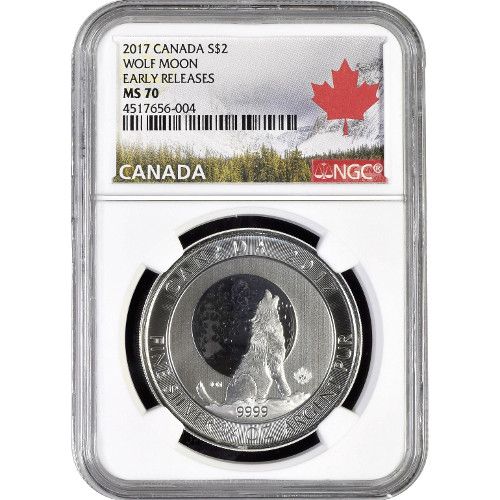 Known as the timber wolf or western wolf, this wild canine is native to the wilderness and remote areas of Eurasia and North America. The gray wolf is the second most specialized member of the genus Canis, behind only the Ethiopian wolf. A common figure on Canadian coinage, the wolf colonized North America in three different waves during the Rancholabrean era. Today, the 2017 oz Canadian Silver Wolf Moon Coin is available from JM Bullion.

The Grey Wolf Series of silver coins from the Royal Canadian Mint debuted with the release of this 2015 oz Canadian Silver Grey Wolf Coin. The RCM plans to release a total of four different designs in the years to come, with one annual release scheduled.

All 2017 oz Canadian Silver Wolf Moon Coins in this listing from JM Bullion is a perfect specimen according to the NGC. Coins in Mint State 70 condition have full, original mint luster and a complete lack of flaws on the surface areas of the coin.

The obverse of the Canadian Silver Grey Wolf Moon Coin includes the right-profile image of Queen Elizabeth II, as created in 2003 by Canadian artist Susanna Blunt. Her portrait is featured on all Canadian currency, and this design was rolled out on Canadian coins starting in 2004.

On the reverse of the 2017 oz Canadian Silver Grey Wolf Moon Coin is the image of a lone wolf sitting on the top of a rocky outcrop. A large, oversized moon rises into the sky behind the wolf, outlining its body as it raises its head toward the heavens to let out its eerie howl into the nights sky.

Royal Canadian Mint products are among the most coveted in the world. Previous Grey Wolf designs from the mint have sold well among numismatists, and the 2015 oz Silver Canadian Grey Wolf performed admirably as well, leaving low availability for these coins to date.

Please direct your questions to a JM Bullion associate at 800-276-6508. You can also connect with us online using our live web chat and email features.