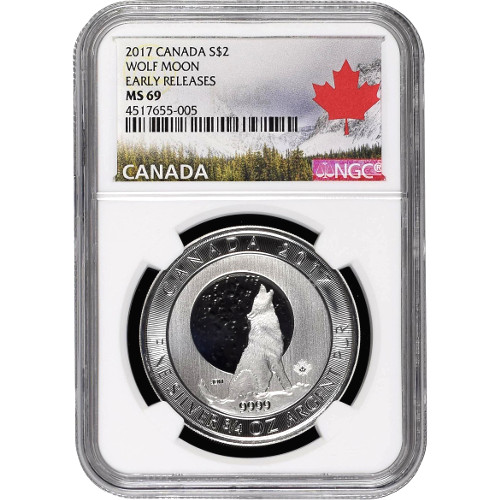 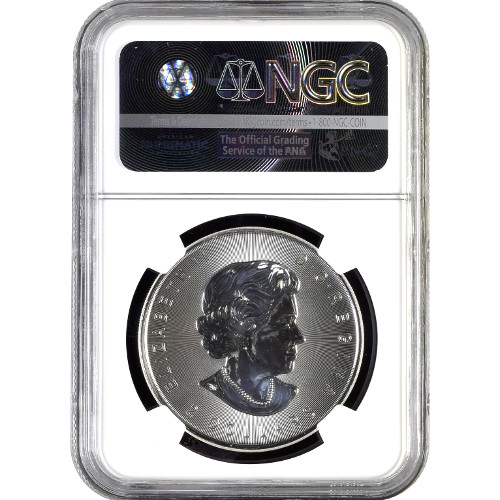 The gray wolf is one of the most impressive predators on the North American continent. Hunting in packs or killing smaller prey on their own, the gray wolf is the largest extant member of its family with males average 95 to 99 lbs. The wolf has often featured on Canadian coinage as a nod to the high number of wolves living in the country. Right now, the 2017 oz Canadian Silver Wolf Moon Coin is available to purchase from JM Bullion.

Each of the 2017 oz Canadian Silver Wolf Moon Coins in this listing from JM Bullion are certified by the Numismatic Guaranty Corporation. Coins with a Mint State 69 grade feature full, original mint luster and include a maximum of two minor detracting flaws. These flaws are limited to minor hairlines and miniscule contact marks.

The Early Release designation is reserved for coins that arrive at the NGC or an approved third-party facility within the first 30 days of the coins set release date as established by the Royal Canadian Mint.

The Grey Wolf is a canid species native to wild and remote parts of both Eurasia and North America. Wolves in the wild are apex predators, with only humans and tigers (Eurasia) posing a serious threat to its existence.

On the obverse of the Canadian Silver Grey Wolf Moon Coin includes the right-profile image of Queen Elizabeth II, as created in 2003 by Canadian artist Susanna Blunt. Her portrait is featured on all Canadian currency, and this design was rolled out on Canadian coins starting in 2004.

The reverse of the 2017 oz Canadian Silver Grey Wolf Moon Coin is the image of a lone wolf sitting on the top of a rocky outcrop. A large, oversized moon rises into the sky behind the wolf, outlining its body as it raises its head toward the heavens to let out its eerie howl into the nights sky.

The Royal Canadian Mint is Canadas official sovereign mint, and it was founded in 1908 during the countrys push toward independence. It operates its original facility in Ottawa, as well as a secondary facility opened in Winnipeg in 1980.

If you have any questions, please dont hesitate to ask. A JM Bullion customer service associate is available at 800-276-6508, online using our live web chat, and via our email address.