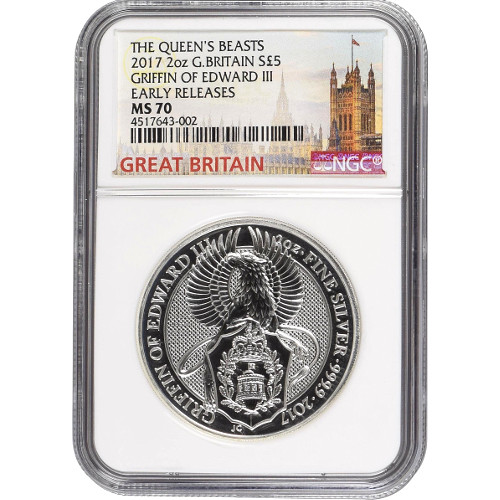 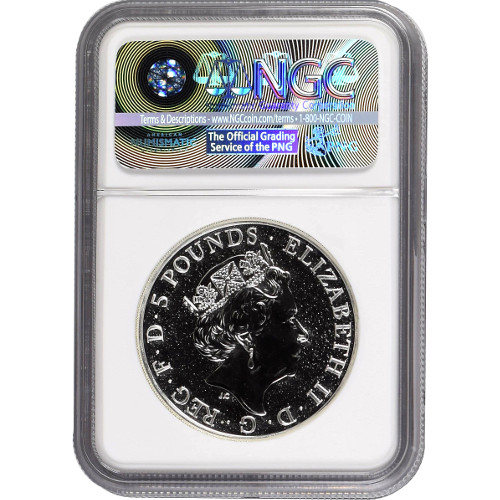 The newest collection of bullion coins from the Royal Mint includes a truly unique offering to go along with the 10 new designs planned for the release in this series. In addition to a new design released bi-annually, the Royal Mint unveiled its first-ever 2 oz silver bullion coin with the Queens Beast Collection. The 2017 2 oz British Silver Queens Beast Griffin Coin is available now from JM Bullion in perfect condition!

The Royal Mint has now released the second coin in the coveted Queens Beast collection. Each new release features a different design representative of one of the 10 beasts featured in statue form at the coronation ceremony for Queen Elizabeth II. Jody Clark, the man behind the all-new effigy of Queen Elizabeth II, is responsible for the creation of the early Queens Beast collection designs.

In the first release, the Lion of England was featured. Now, for the second release the Royal Mint introduces the mythical Griffin. With the head, wings, and front paws of an eagle, and the body of a lion, this was said to be the most powerful animal in the world. That power comes from the lions status as king of the beasts, and the eagles status as king of the birds.

The reverse of all 2017 2 oz British Queens Beast Griffin Silver Coins features the image of a Griffin standing tall and proud, its wings fully outstretched over its head. It has its front paws up on a shield, and includes engravings of the weight, metal content, purity, and year of issue.

The 2017 2 oz British Silver Queens Beast Griffin Coins in this product listing have a perfect grade of Mint State 70 from the NGC. Coins with this certification have their full, original mint luster and lack all detracting flaws. As Early Release coins, these were received by the NGC or an NGC-approved depository within 30 days of the release date set by the Royal Mint for 2017-issued Queens Beast Griffin coins.

We encourage JM Bullion customers to contact our customer service team with questions. Our associates are available at 800-276-6508, online using our live web chat feature, and via our email address.