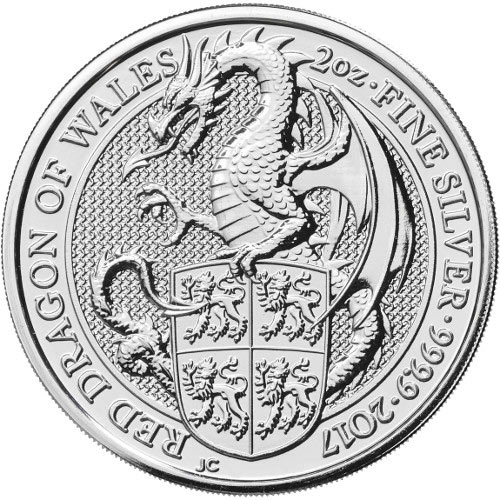 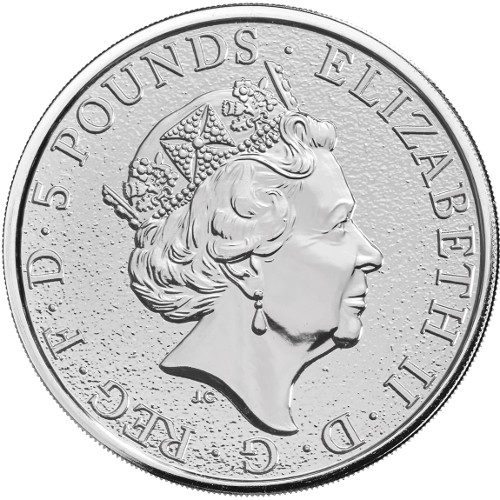 Any quantity available for $48.99 per oz over spot!
Add to WishlistLog In to add this product to your Wishlist
Free Shipping on $199+ Orders

One of the most exciting new programs from the Royal Mint in London is the Queen’s Beast Collection. This 10-coin offering from one of the world’s oldest minting facilities includes new designs each year, all representative of the creatures captured in statue form during the coronation of Queen Elizabeth II. Today, the 2017 2 oz British Silver Queen’s Beast Dragon Coin is available to you from JM Bullion.

The Queen’s Beast collection of silver and gold coins from the Royal Mint is slated to feature a total of 10 designs. Each new release represents one of the ten beasts carved into wooden statues that was present at Westminster Abbey during the 1953 coronation ceremony for Queen Elizabeth II.

These 2017 2 oz British Dragon Coins are available in BU condition. Coins in this condition have no signs of wear and tear, but you are bound to notice minor flaws such as breaks in the luster, spotted surfaces, and contact marks from the striking of blanks at the mint facility.

Please don’t hesitate to reach out to JM Bullion if you have any questions. You can contact our customer service team on the phone at 800-276-6508, chat with us live online, or simply send us an email with your inquiries.

Shane from OK - April 19, 2017
"I love the Queen's beasts series. The two oz troy means you can really feel the heft. It's worth the modest premium to pick up one of these bad boys. Also thanks to JM bullion, I have never had a problem with their service. I referred two of my friends to the 10 troy oz at spot price deal and now they are customers also!"

Krystal from NY - March 21, 2017
"Bought two of these BEAUTIES and am 100% satisfied with them both! Love the design and that it is a 2oz coin-the extra weight is well worth it. Came shipped in a flip big enough for one on each side, very pleased with JMB as usual!!"

Farah from OK - March 16, 2017
"Most impressive. Excellent design--best in the series so far. Something about a dragon. And I really love the 2 oz heft... one phat little baby. (: I think I have a new favorite. Thanks for the great service, JMB!"