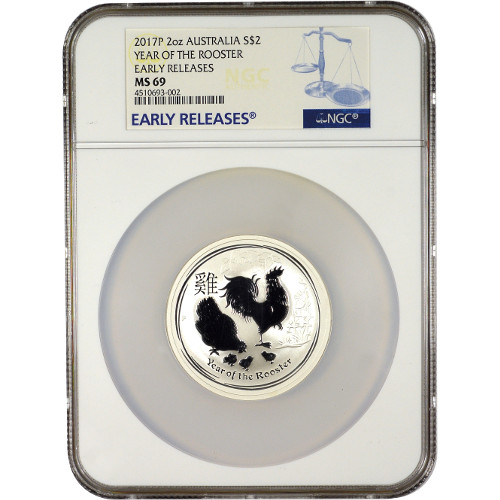 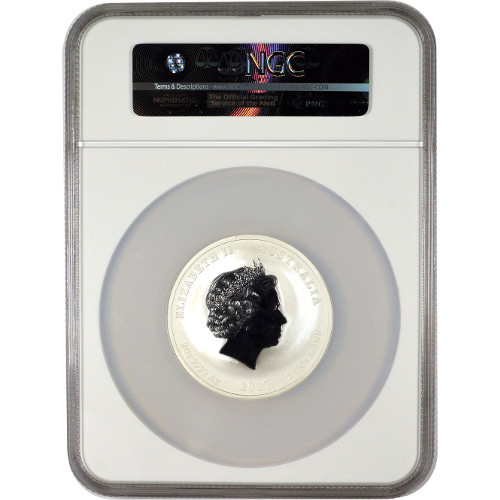 The Perth Mints Lunar Series II program is one of the most diverse offerings in the precious metals marketplace. Not only do these coins feature separate gold and silver designs for each release year, there is a new design used with each year to represent the animal depicted on the Chinese Lunar Calendar. Right now, the 2017 2 oz Australian Silver Rooster Coin is available as a certified coin from JM Bullion.

The Year of the Rooster last occurred in 2005 during the Lunar Series I program from the Perth Mint, but there is an all-new design for the 2017 Australian Silver Rooster coin in Lunar Series II. By in large, all coins in the Lunar Series II release feature more intricate design fields than their predecessors.

Each of the 2017 2 oz Australian Silver Rooster coins in this release earned an Early Release, or ER, designation from the NGC. This means each of these coins was received for certification by the NGC within the first 30 days of the Perth Mints release date for the 2017 dated coins.

All Australian Silver Roosters in this listing have a near-perfect grade of MS69 from the NGC. Coins with this certification feature full, original mint luster, but also include a maximum of two minor detracting flaws on the surface. These include the possibility of minuscule hairlines or contact marks, but are located outside the primary focal areas of the coin.

The reverse of the 2017 2 oz Australian Silver Rooster coin features the image of a rooster, along with a hen and three chicks pecking for food. Engravings identify the name of the release in Lunar Series II and feature the Chinese symbol for rooster.

On the obverse of Australian Silver Rooster coins is the effigy of Queen Elizabeth II. Captured in right-profile relief, this image was created in 1998 by Ian Rank-Broadley as the fourth-generation depiction of Her Majesty.

The Perth Mint was founded in 1899 as the third and final Royal Mint facility in Australia under British control. Today, it is the only mint other than the Royal Australian Mint to operate in the country and is the oldest operating facility.

If you have questions, please contact our customer service team at 800-276-6508. You can also connect with us online through our live chat and email services.