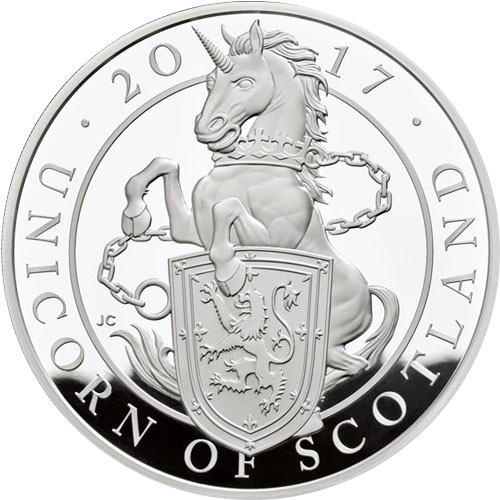 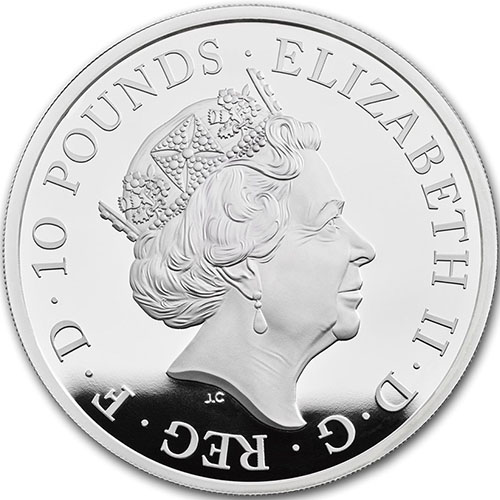 The Royal Mint offers 10 different designs in the wildly popular and highly coveted Queens Beast Series. Launched with the Lion of England, the bullion and proof versions of the coin have divergent paths in the introduction of new designs. The proof series offers its second release as the fourth overall design in the collection. Today, the 2017 10 oz Proof British Silver Queens Beast Unicorn Coin is available to you from JM Bullion.

Before there was a United Kingdom, there were two separate kingdoms in Britain. England was ruled by a separate crown from that of Scotland, and the two had differing designs for their coat of arms. William I created the first Scottish coat of arms in the 12th century, adopting the majestic unicorn as his kingdoms symbol.

All 2017 10 oz Proof British Silver Queens Beast Unicorn Coins ship inside of the Royal Mints protective display boxes. These 10 oz coins are one of four options in the proof series, along with the 1 oz, 5 oz, and 1 Kilo. Interestingly, the proof collection does not feature the 2 oz weight found in the silver bullion offering in the Queens Beast.

The reverse of all Proof British Silver Queens Beast Unicorn Coins includes the depiction of the Unicorn of Scotland. Shown standing on its hind legs, this powerful beast has its front hooves above the heraldic shield of England which bears the Lion of England design upon it.

On the obverse of the 2017 10 oz Proof British Silver Queens Beast Unicorn Coin is the image of Queen Elizabeth II. Her Majesty appears in right-profile relief on all British coinage, and this 2015 design from Jody Clark is the latest fifth-generation depiction of the Queen.

Please feel free to contact JM Bullion if you have any questions. Our customer service team is available to you on the phone at 800-276-6508, on the web using our live chat feature, and via our email address.