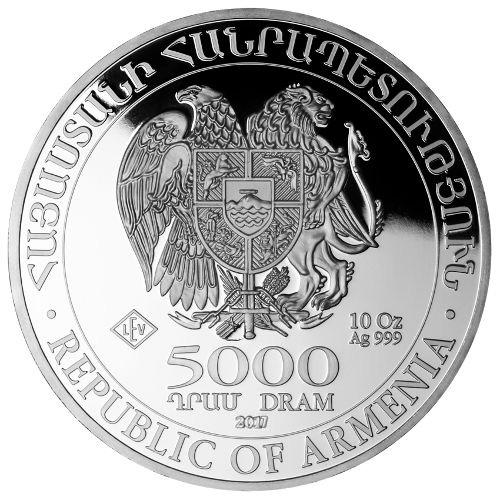 The Book of Genesis in the Christian bible tells of a flood so epic that it wiped out all human civilization. Only a man named Noah and his family survived, together with two of every animal in the world, on a wooden ark to repopulate the planet after. This is captured in its full beauty on the 2017 10 oz Armenian Silver Noahs Ark Coin, available right now from JM Bullion.

Armenia was the first modern kingdom or nation in the world to adopt Christianity as its official state religion. But its association with the religion runs much deeper than that. In Genesis, Noahs Ark comes to rest on the sides of Mount Ararat.

Mount Ararat was, historically, within the borders of Armenia. Only the end of World War I, the dissolution of the Ottoman Empire, and politically drawn boundaries could apparently move mountains, as the entire mountain was gifted to Turkey when borders were redrawn at the end of the war. Prior to that event, the border between the two regions ran directly over Mount Ararat.

On the obverse of the Armenian Silver Noahs Ark coin is the coat of arms for the nation of Armenia. The heraldic shield features a small depiction of Noahs ark resting on the sides of Mount Ararat in the center of the shield, with an eagle on the left of the shield and a lion on the right.

The reverse of all 2017 10 oz Armenian Silver Noahs Ark coins includes the full-scale depiction of the ark as it floats atop the receding flood waters. A dove is depicted in the foreground with an olive branch in its beak, a symbol that the waters were receding and Noahs familys ordeal was near an end.

All 2017 10 oz Armenian Silver Noahs Ark coins in this listing are in BU condition. Coins in this condition exhibit no signs of wear and tear, though you may notice a range of minor flaws including breaks in the luster, spotted surfaces, and contact marks from the coining process.

If you have any questions, please feel free to contact JM Bullion. Our customer service team is available at 800-276-6508, online through our live chat, and via our email address.