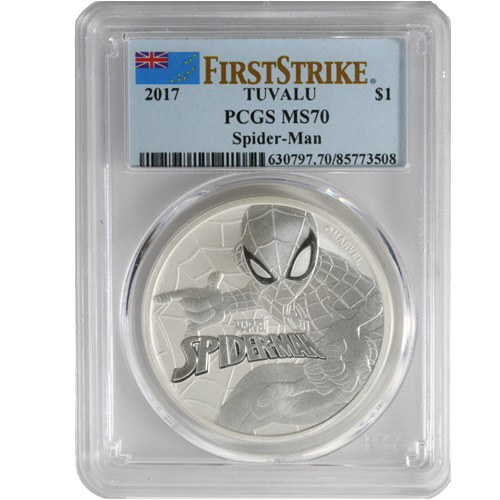 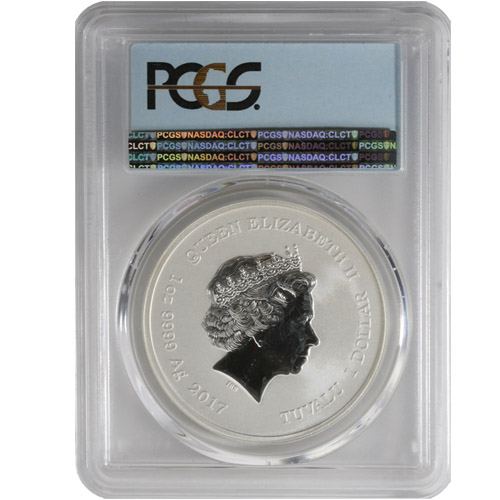 The Marvel Series of silver bullion coins from the Perth Mint has proven to be one of the hottest items in the last several years in the precious metals marketplace. With .9999 pure silver content and unique Marvel Comics-themed designs, this series has benefited from timing in coordination with feature film releases. Right now, 2017 1 oz Tuvalu Spiderman Marvel Series Silver Coins are available to purchase online from JM Bullion in perfect condition.

Each 2017 1 oz Tuvalu Spiderman Marvel Series Silver Coin in this product listing is available to you for purchase today in perfect condition. Coins with a Mint State 70 grade exhibit full, original mint luster and present with no detracting flaws of any kind on the design elements or surface areas.

Queen Elizabeth II is depicted on the obverse of the 2017 1 oz Tuvalu Spiderman Marvel Series Silver Coin. In this right-profile portrait, you will find Her Majesty wearing the Girls of Great Britain and Ireland Tiara on her head. This portrait was created in 1998 by Ian Rank-Broadley for the Royal Mint of England.

Spiderman is shown on the reverse design element of the 2017 Tuvalu Spiderman Marvel Series Silver Coin. The teenage web-slinger lives with his aunt and uncle, and is eventually driven to a life of revenge fighting for the little guy after his uncle’s death at the hands of a low-level criminal during Peter Parker’s youth.

Perth Mint is the oldest operating facility in Australia. Founded in 1899, it was originally opened to be part of the Royal Mint of England system on the continent. The Australian federation movement launched just a few years later changed that path. As of 1965, it has been a state-owned mint of Western Australia.

If you have any questions, please feel free to call. JM Bullion customer service is available at 800-276-6508, online using our live chat, and via our email address.