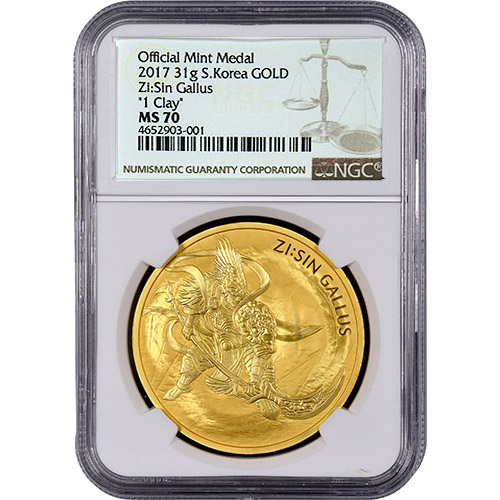 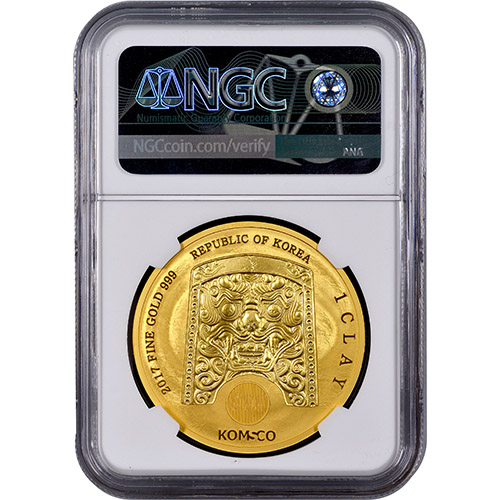 The Zi:Sin Series of silver and gold coins from KOMSCO mark the latest release from the official mint of South Korea. Introduced one year after the popular Chiwoo Cheonwang, this new coin offering will feature a total of 10 designs based upon Korean cultural lore. The 2017 1 oz South Korean Zi:Sin Gallus Gold Medal is now available to you for purchase online from JM Bullion in perfect condition.

In the Zi:Sin Series of silver and gold from KOMSCO, the Korean minting operation focuses on the Twelve Guardians. These warriors were the spearhead of gods armies in the battle between the forces of good and evil. Each different commander had a unique role and skill set that enabled them to lead good to victory over evil.

The designs in this series will be different on the reverse for each release, with the guardian names aligning with the Chinese lunar calendars animal species. Gallus lands in the Year of the Rooster (2017), while the upcoming Canis release comes in the Year of the Dog (2018).

On the obverse of each 2017 1 oz South Korean Zi:Sin Gallus Gold Medal is the image of the warrior Gallus. A messenger of light, he delivers a blinding light with the brightness of the sun to chase away the evil spirits that would do harm to the armies of good and the innocent people of the world.

The reverse of the Zi:Sin Gallus Gold Medals feature the image of Do ggae bi. This creatures face is famous in Korean culture, being used on roofing tiles of homes to help ward off evil spirits with its grotesque look. It also appears on the shield of the God of War, Chiwoo Cheonwang.

Your purchase of a 2017 1 oz South Korean Zi:Sin Gallus Gold Medal in this listing provides a medal in perfect condition. Specimens with a Mint State 70 grade have full, original mint luster and lack any signs of detracting flaws on the surface areas of the medal.

KOMSCO is the official mint of South Korea. Opened in 1951, it produces commemorative coinage as well as circulation banknotes for the nation, in addition to passports and other official government documents.

We encourage JM Bullion customers to contact us with questions. You can reach out to us on the phone at 800-276-6508, chat with us live online, or email us directly with your inquiries.