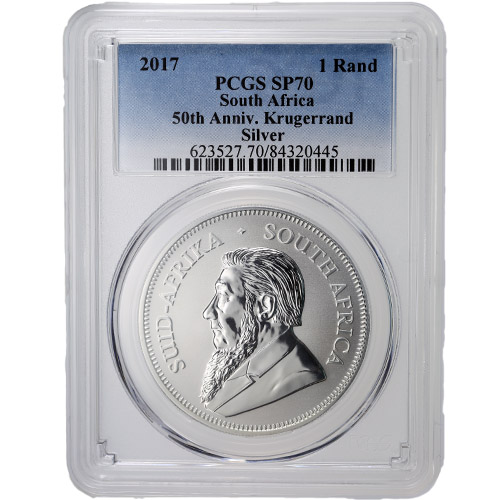 The South African Mint celebrates the landmark 50th anniversary of the Gold Krugerrand coin with the release of a first-ever Silver Krugerrand. Together with numerous other offerings, these coins represent a one-time striking from the mint designed to accentuate the prominence of the Krugerrand and celebrates its accomplishment. Today, the 2017 1 oz South African Silver Krugerrand Coin is available to you online from JM Bullion with perfect certification.

For the 50th anniversary of the Krugerrand, the South African Mint has pulled out all the stops. In addition to these 2017 1 oz South African Silver Krugerrand Coins, youll find a first-ever platinum coin available from the mint along with expanded options in the fractional-weight gold collection.

Each of the 2017 1 oz South African Silver Krugerrand Coins in this product listing have been certified SP70 coins by the PCGS. Coins in this condition are considered perfect specimens, and feature full, original mint luster with no detracting flaws of any kind on the surface areas. All Silver Krugerrands from the South African Mint are struck on special silver blanks that have been treated with the utmost care throughout the coining process.

Please feel free to reach out to JM Bullion if you have any questions about these silver coins for sale. You can contact our customer service team on the phone at 800-276-6508, chat with us live online, or simply send us an email with your inquiries.