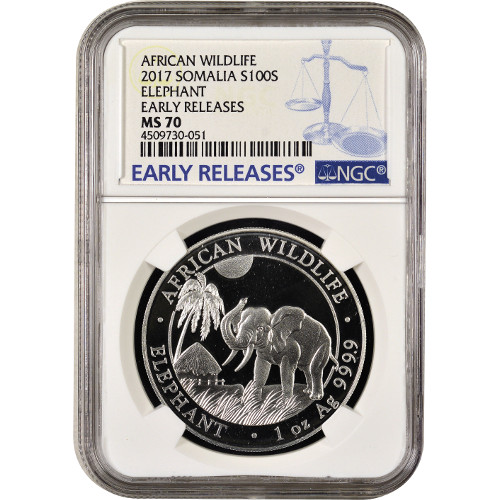 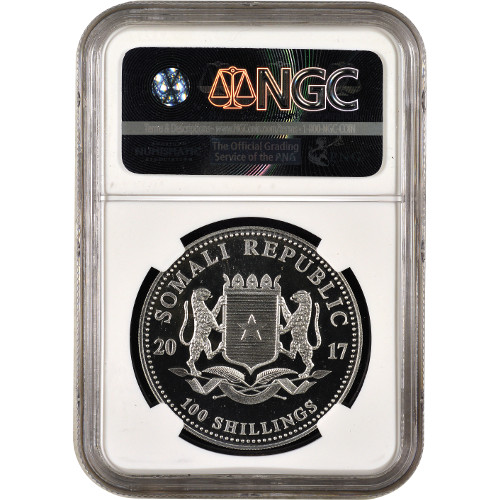 The African Wildlife Series of silver, gold, and platinum bullion and proof coins are some of the most interesting and unique in the world. There is a new design on the obverse side of the coin each year, adding to the inherent value of the .9999 purity of the precious metals. Today, the 2017 1 oz Somalia Silver Elephant coin is available online today at JM Bullion.

African Wildlife Series elephant design coins began life as the Zambian Elephant series. These coins were released by the Bavarian State Mint from 1999 to 2003, before switching to the nation of Somalia as a bullion and proof issue.

The coins have long been popular because of the new design on the obverse each year. That’s not the only changes that have occurred over time though. The purity of the silver coins was boosted from .999 to .9999 in 2016, and a platinum version of the coin was added in 2016, as well.

On the obverse of the 2017 1 oz Somalia Silver Elephant coin you’ll find the image of the newest African Elephant design. The fourteenth design used in the series, it features an African elephant in the foreground amidst the grasses of the savanna, with a traditional thatch-roof hut in the background and a small palm tree.

The reverse of all Somalia Silver Elephant coins includes the image of the national crest. The Somalia coat of arms includes a heraldic shield in the middle with a single star on it, similar to the national flag. Engravings on this face include the nation of issue, year of issue, and face value of the coin.

Each of these 2017 1 oz Somalia Silver Elephant Coins has a Mint State 70 grade, which is considered perfect by the NGC. Coins with an MS70 grade have full, original mint luster and bear no detracting flaws of any kind. An ER designation stands for Early Release, and means these coins were received by the NGC for certification within the first 30 days of their release date as set by the Bavarian State Mint.

Please don’t hesitate to reach out to JM Bullion with your questions. You can contact JM Bullion customer service at 800-276-6508, connect with us online through our live chat, or email us directly.

Laura J from - May 13, 2019
"This was one of three Somalia Silver elephants included in a 9 silver coin purchase. I am very pleased with them. Plan to order more in the future."