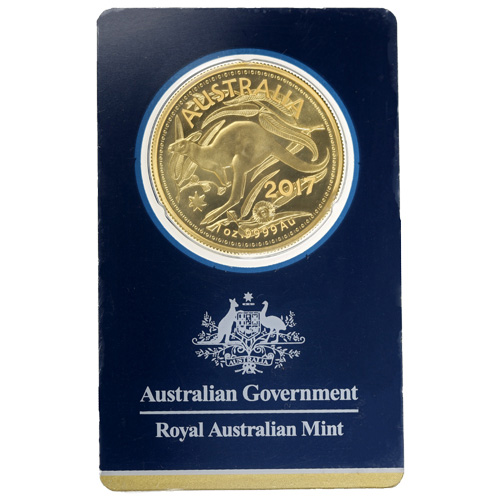 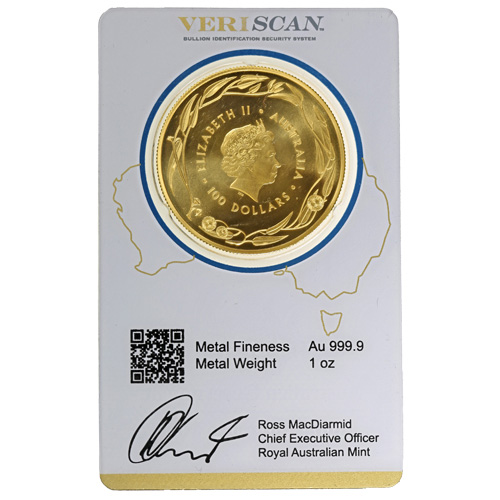 Each 2017 1 oz Royal Australian Mint Gold Kangaroo Coin is in BU condition. Coins in BU condition show no signs of wear and tear, however you may notice a variety of minor flaws. These include breaks in the luster, spotted surfaces, and contact marks from striking during the coining process.

The Royal Australian Mint Gold Kangaroo coin revives the copper penny design used by the nation from 1938 to 1964. These coins debuted in 1911, but had only an engraving of the face value and Commonwealth of Australia on the reverse. Starting in 1938, a kangaroo was put on the reverse along with the commonwealth star of Australia.

On the obverse of the Royal Australian Mint Gold Kangaroo is the latest effigy of the nations sovereign monarch. Queen Elizabeth II has featured on all Australian coinage since her ascension to the throne in 1952. This portrait comes from 1998 and was created as a fourth-generation depiction by Ian Rank-Broadley.

The Royal Australian Mint Gold Kangaroo is the only gold bullion coin in the world that ships with an Assay card included, which arrives inside of a sealed plastic package provided to the mint by PAMP Suisse.

Located in the federal capital city of Canberra, the Royal Australian Mint is the nations official sovereign mint. It is the only mint in the nation aside from the Perth Mint that is operational, and was the first non-Royal Mint of London facility to open when it started up in 1965.

Please direct your questions to a JM Bullion associate at 800-276-6508. You can also connect with us online through our live chat and email features.