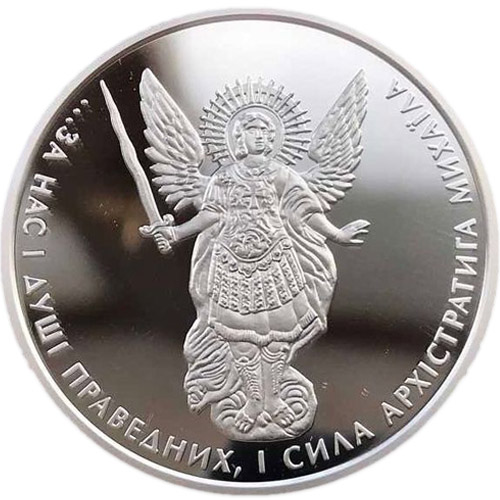 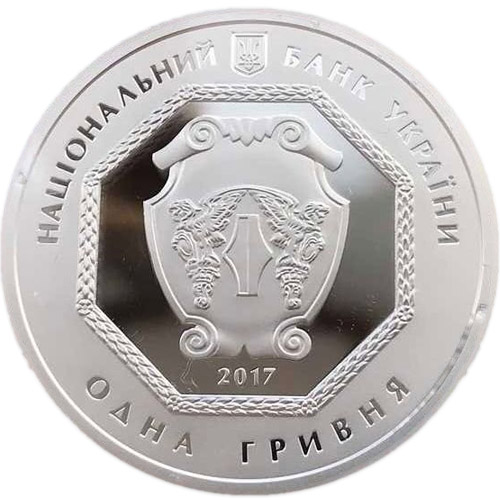 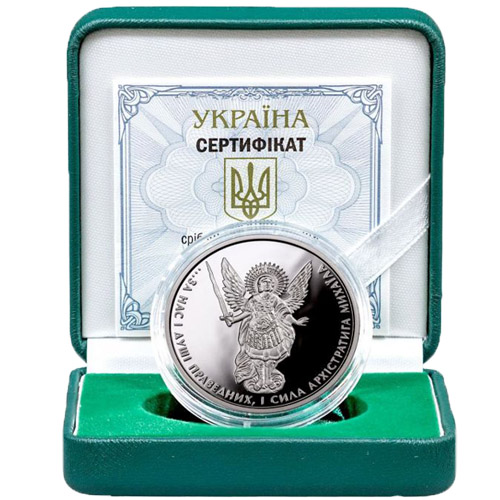 Each 2017 1 oz Proof Ukrainian Silver Archangel Michael Coin is available to you here with the original mint packaging. The coins are directly housed in a plastic capsule and come with a presentation box. Included within the box is a Certificate of Authenticity. The coins have proof visuals that include frosted designs and mirrored fields.

The release of the 2017 Proof Ukrainian Silver Archangel Michael Coins was limited to 10,000 coins in all. However, only 5,000 of these coins were released for purchasing to those living outside of Ukraine.

Ukrainian Silver Archangel Michael Coins have been available since 2011. While the series offers both gold and silver coins, the silver series is limited to a 1 oz silver coin only. The gold versions of the coin come in traditional 1 oz gold and fractional-ounce gold coins.

Obverse design elements on the 2017 Proof Ukrainian Silver Archangel Michael Coins include the national coat of arms for Ukraine. The national seal is featured at the top of the design field between the Ukrainian words that identify the National Bank of Ukraine as the issuer of the coins. In the center of the design field, you will find the seal of the bank and a date mark for the release.

Reverse visuals on 2017 1 oz Proof Silver Archangel Michael Coins include a Roman-era depiction of the archangel Michael. His image is shown with Roman armor and sword in his right hand. He has a halo of light around his head and wings on his back.

Like many other sovereign mints, the National Bank of Ukraine strikes both national currency and bullion specimens for Ukraine. The bank was formed in 1992 after Ukraines split from the Soviet Union.

If you have any questions, were here to help. JM Bullion customer service is available at 800-276-6508, online using our live chat, and via our email address.