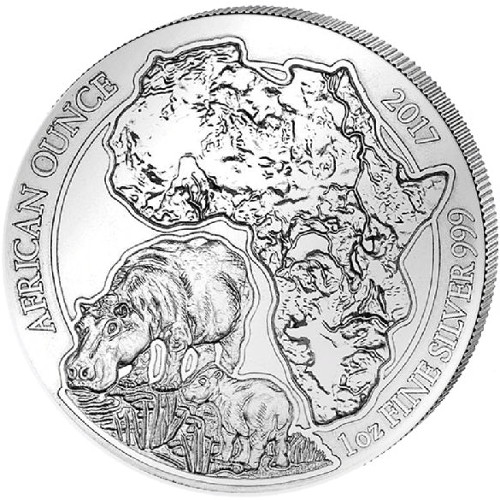 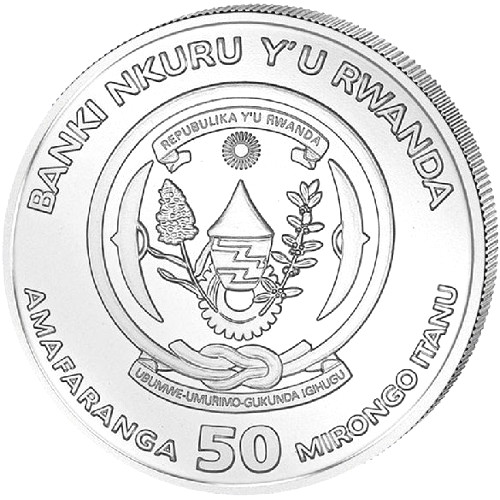 The Rwanda Wildlife Series of silver coins celebrate the beauty of the animal kingdom. This particular series focuses on the native species of the African continent. The name of the series is slightly misleading as not all of these animals are native to Rwanda. Instead, each of the creatures featured in the Rwanda Wildlife Series is native to the African continent as a whole, with some of them residing within the borders of Rwanda.

For this 10th release, the BH Mayer Mint continues the use of a common design element on the obverse while changing the images in the lower-left design field. Each coin includes a continental outline of Africa, which is limited to geographical features rather than political boundaries.

On the obverse of the 2017 1 oz Proof Rwandan Hippo Silver Coin is that common design element in the center, with a family of three hippos in the lower-left field of the design. Engravings on this face include the term African Ounce, along with the coins year of issue, weight, purity, and metal content.

The reverse of all Rwandan Hippo Proofs includes the coat of arms for Rwanda. Rather than indicating a nation of issue, above the shield youll find an engraving that indicates these coins are backed by the Central Bank of Rwanda. All coins in this series feature engravings on the reverse in a local tribal dialect used in Rwanda for centuries.

All 2017 1 oz Proof Rwandan Hippo Silver Coins are struck in Germany. BH Mayer Mint, known also as just Mayer Mint GmbH Germany, was founded in 1871, making it one of the younger mints operating in the European powerhouse. Unlike the sovereign mints of Germany, Mayer Mint is a family-owned operation that has been controlled by five generations of the same family since its inception.

We encourage JM Bullion shoppers to contact us with questions at 800-276-6508. You can also reach us online as well using our live chat or email address.