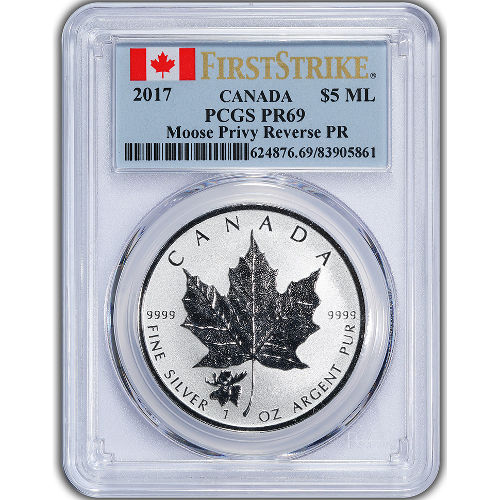 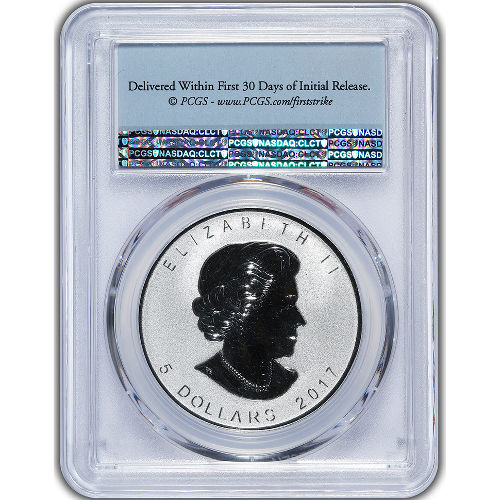 Each 2017 1 oz Moose Privy Canadian Silver Maple Leaf listed here is a near-perfect specimen according to the PCGS certification process. Coins in PR69 condition exhibit full, original mint luster and feature a maximum of two minor detracting flaws. These minor flaws are limited to minuscule hairlines or contact marks, and are found only outside the primary focal areas of the coins surface.

Coins with the First Strike designation are among the first from the Royal Canadian Mint to arrive at the PCGS for certification following their official release each year. More specifically, these coins had to arrive for grading at the PCGS within the first 30 days of the date of release set by the RCM.

The obverse of all Wild Canada Canadian Silver Maple Leaf reverse proof coins features the right-profile portrait of Queen Elizabeth II. Captured by Susanna Blunt, Her Majestys profile appears along with engravings of the Queens name, the year of issue, and the face value of the coin.

On the reverse of each 2017 Moose Privy Canadian Silver Maple Leaf bears the traditional sugar maple leaf design for the bullion series, complete with a moose privy mark in the lower-left area of the design field. These coins include all of the safety and security features of the Canadian Maple Leaf bullion collection, such as the radial lines that help deter counterfeiting.

If you have any questions about these reverse proof coins, please contact JM Bullion at 800-276-6508. You can also connect with us online using our live chat and email features.