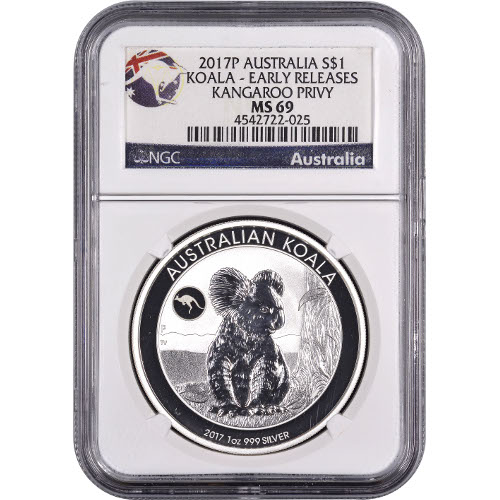 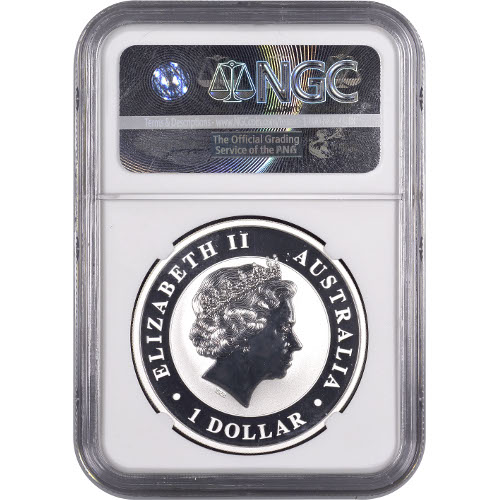 Each of the 2017 1 oz Kangaroo Privy Australian Silver Koala coin in this listing is a near-perfect specimen according to the NGC. Coins with a Mint State 69 grade exhibit full, original mint luster, but also bear a maximum of two minor detracting flaws. These flaws are limited to miniscule hairlines or contact marks located outside the primary focal areas of the coin.

Kangaroo privy marks on these 2017 Australian Silver Koala coins mark the 10th anniversary of the Koala series, and celebrate two of the nation’s most iconic native species. Both marsupials, these creatures are widely recognized around the globe as symbols of the Australian nation.

On the reverse of the 2017 1 oz Kangaroo Privy Australian Silver Koala Coin is the all-new design of the koala for the series. It features a single koala sitting along the ground, with a kangaroo privy mark located in the upper-left field of the design.

The obverse of all Australian Silver Koala coins includes the right-profile portrait of Queen Elizabeth II. Her Majesty’s effigy features on the obverse of all British and commonwealth coins, with this particular design coming from Ian Rank-Broadley in 1998 and serving as the fourth-generation depiction used since 1952.

Opened in 1899 as the third and final Royal Mint facility in Australia, the Perth Mint is the oldest operating mint location in Australia. As of 1970 it is a state-owned entity of the government in Western Australia, and operates independently of the Royal Australian Mint.

If you have any questions, please don’t hesitate to ask. JM Bullion customer service is available on the phone at 800-276-6508, on the web using our live chat, and via our email address.