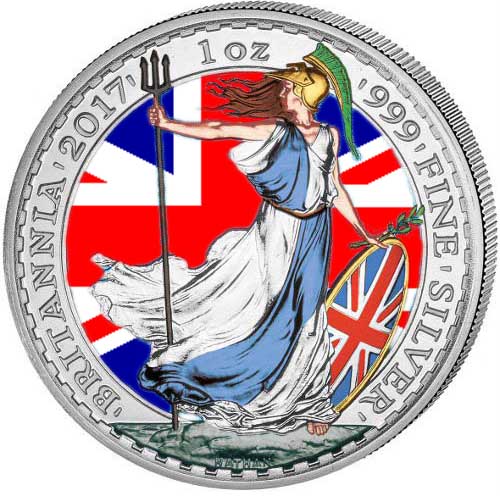 The British Britannia coin is a popular bullion program from the Royal Mint that features an image 2,000 years in the making of British culture. Britannia was originally a term used by the Greeks and Romans to define the island of Britannia. Over the centuries, it has been used to define Britons and even name a goddess believed to protect the island from invaders. The 2017 1 oz Colorized British Silver Britannia Coin is available online today from JM Bullion.

The 2017 1 oz Colorized British Silver Britannia coin in this product listing has magnificent full color finishes added to the reverse design of the coin. Britannia herself remains clad in a brilliant silver robe, while the red, white, and blue colors of the Union Jack flag on her shield have been brought to life.

Her Corinthian helmet has a beautiful gold color while her brown locks of hair blow in the breeze against a backdrop of the Union Jack. British Silver Britannia coins honor the historical belief in Britannia, a goddess who protected the British Isles from all invaders.

On the reverse of these 2017 1 oz Colorized British Silver Britannia coins youll find that magnificent image of Britannia, with all the colorized features mentioned above included in this iconic image of British culture.

The obverse of the 2017 1 oz Colorized British Silver Britannia Coin includes the latest effigy of Queen Elizabeth II. Her Majesty has featured on the obverse of British coinage since her ascension to the throne in 1952, and this is the latest update to her portrait. Created in 2015 by Jody Clark, it now appears on all British currency.

Each 2017 1 oz Colorized British Silver Britannia coin in this JM Bullion product listing is in BU condition. Coins in BU condition have no signs of wear and tear, however you may notice a range of minor flaws including breaks in the luster, spotted surfaces, and contact marks as a result of production at the mint.

All colorized Silver Britannia coins are originally produced by the Royal Mint. These limited-edition coins, 5,000 in total, are available courtesy of Emporium Hamburg. The third-party authorized dealer in Germany added the colorized application to the coins reverse fields only.

We encourage all JM Bullion shoppers to contact us with questions at 800-276-6508. Were also available online through our live chat and email features.