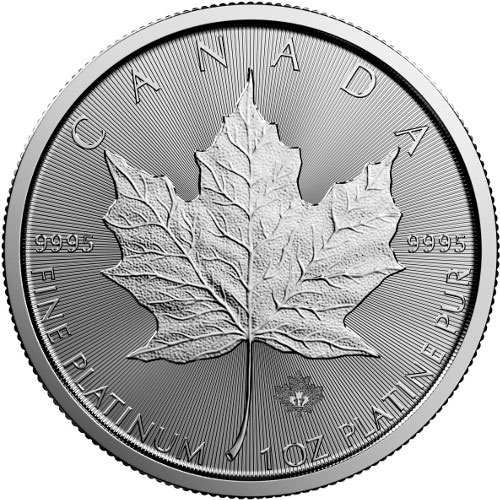 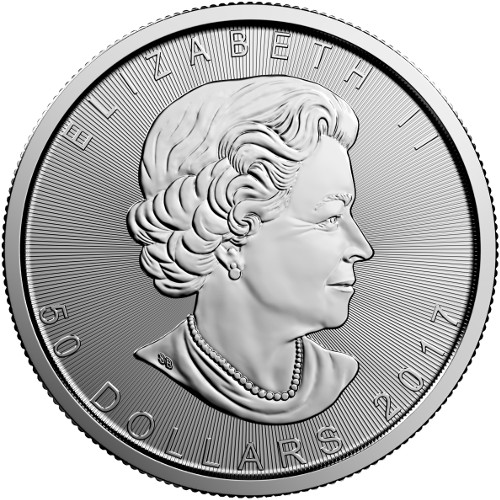 The Canadian Maple Leaf Series of bullion coins from the Royal Canadian Mint is one of the longest running and most robust coin series in the world today. Introduced in gold in 1979, it was just the second major gold bullion coin available at the time, and has expanded to included silver, palladium, and platinum, as well. Today, the 2017 1 oz Canadian Platinum Maple Leaf Coin is available to purchase from JM Bullion.

All 2017 1 oz Canadian Platinum Maple Leaf Coins in this listing are in BU condition. Coins in BU condition show no signs of wear and tear, however you may notice a range of flaws that include breaks in the luster, spotted surfaces, or contact marks resulting from the striking of blanks during production.

Canadian Platinum Maple Leaf coins were introduced in 1988 alongside the Canadian Silver Maple Leaf coin. Originally these coins were available in a 1 oz weight and multiple fractional weights. However, that original production run lasted from 1988 to 2001 before an 8-year hiatus. When the coin series returned in platinum in 2009, only the 1 oz coin was made available.

On the reverse of the 2017 1 oz Canadian Platinum Maple Leaf Coin is the image of the sugar maple leaf, the same iconic design on the reverse of all gold, silver, and palladium versions of the coin. It includes engravings of the nation of issue, purity, and metal content, as well as the new micro-laser engraved radial lines and maple leaf privy added to Canadian coins to deter counterfeiting.

The Royal Canadian Mint was founded in 1908 as the official sovereign mint of Canada. The country had a dire need for independent control over its coinage at this point, and one of the many initial tasks of the mint was to refine gold found in the Yukon Territories in the late 19th century.

Please direct your questions to a JM Bullion associate at 800-276-6508. You can also connect with us online through our live web chat and email features.