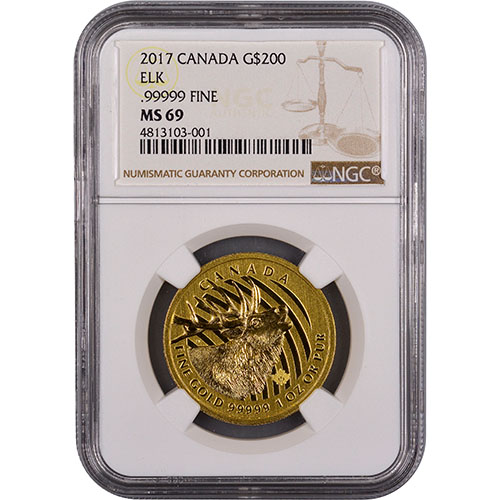 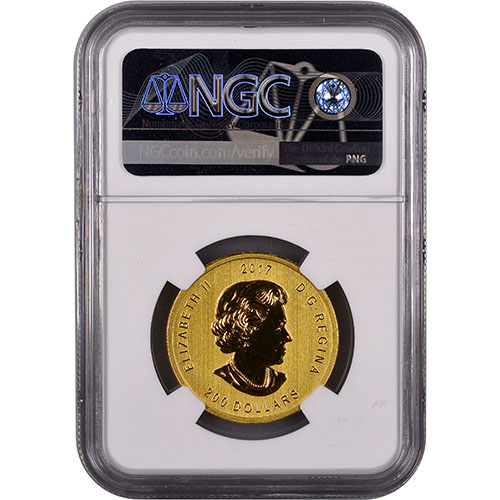 The Call of the Wild Series of gold coins from the Royal Canadian Mint brings investors an impressive .99999 pure gold coin with new designs for each annual release. Launched in 2014, the collection features one coin issue per year with a new design of a predator or other famous wild species found in Canada. Right now, 2017 1 oz Canadian Gold Elk Coins are available to purchase online from JM Bullion with NGC certification.

Each 2017 1 oz Canadian Gold Elk Coin available here earned a near-perfect certification from the NGC. Coins with a Mint State 69 grade exhibit full, original mint luster with a maximum of two minor flaws. These detracting flaws are limited in nature to minuscule contact marks or hairlines found outside the primary focal areas of the coin.

The Call of the Wild Series debuted in 2014 with the Howling Wolf design. Subsequent designs the preceded the Canadian Gold Elk Coin include the 2015 Growling Cougar and the 2016 Roaring Grizzly designs. Each coin has a different animal on the reverse, but each one does share a common design element that uses a soundwave pattern to reflect the animals call echoing into the wilderness.

On the reverse of 2017 1 oz Canadian Gold Elk Coin is the image of an Elk bugling, as their call is known. The elk is the largest species within the deer family in the world, and also happens to be one of the largest land mammals in North America and Eastern Asia. The male elk will use a series of bugling calls during mating season to attract females and establish its dominance over other males.

The obverse of all 2017 Canadian Gold Elk Coins features Queen Elizabeth II. This is the fourth-generation depiction of Her Majesty which captures the Queen of England in right-profile relief. It was designed in 2003 by Susanna Blunt for the Royal Canadian Mint.

The Royal Canadian Mint is Canadas official sovereign mint. Opened in 1908, today it consists of facilities located in the federal capital of Ottawa and the city of Winnipeg.