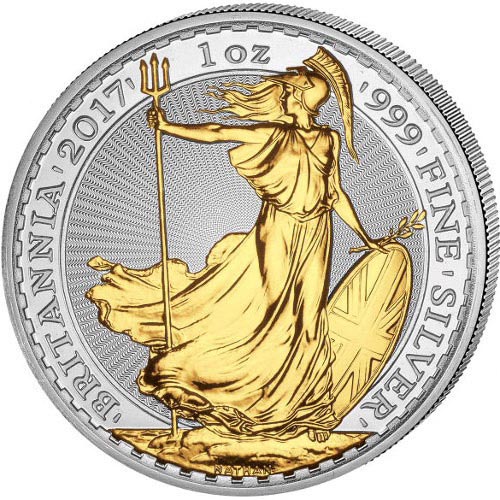 There is no coin from the Royal Mint in London than the Britannia Series. Available as both gold and silver coins, there are annual releases of this beautiful coin design that include both metals on one stunning collectors item. The 2017 1 oz British Silver Britannia Coin is available today from JM Bullion complete with a gilded finish.

The British Silver Britannia coin is the official bullion coin for the United Kingdom, with depictions of the countrys monarch, Queen Elizabeth II, on one side and the guardian of the British Isles, Britannia, on the other.

Britannia is a concept older than the modern United Kingdom itself. The term was originally used by the Roman Empire to label the British Isles as a territory of the empire itself, and was at one time used to describe the people themselves. More recently in human history, Britannia was a goddess believed to guard the isles from outsiders.

Each of these 2017 1 oz British Silver Britannia Coins has a beautiful, 24-karat gold gilded finish. This is applied only to the reverse side of the coin, where youll find Britannias figure holding a shield with the Union Jack flag on it to guard the seas and a trident in her right hand to ward off invaders.

The obverse of the 2017 1 oz British Silver Britannia Coin includes the latest effigy of Queen Elizabeth II. Her Majesty has featured on the obverse of British coinage since her ascension to the throne in 1952, and this is the latest update to her portrait. Created in 2015 by Jody Clark, it now appears on all British currency.

All 2017 1 oz British Silver Britannia gilded coins in this offering are in BU condition. Coins in this condition exhibit no signs of wear and tear, though you may notice a range of minor flaws including breaks in the luster, spotted surfaces, or contact marks from the coining process.

British Silver Britannia coins are struck by the Royal Mint, the official sovereign mint of the United Kingdom. Founded in the 7th century, this is Europes oldest operating mint facility continuously in operation.

We encourage all JM Bullion customers to ask questions when they arise. Our customer service team members are available at 800-276-6508, available online through our live chat, or accessible via email.

Rick from OH - February 03, 2017
"For those who have not yet discovered the available gilded coins being offered by JM Bullion, I highly recommend purchasing these products. The quality is outstanding and the amount of gold is just right. Thank you JM Bullion!"