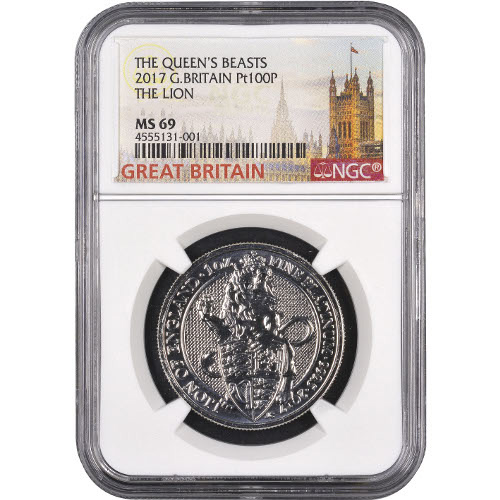 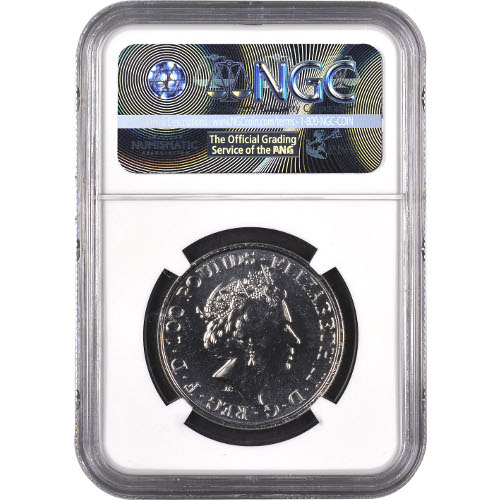 There is no greater creature in the heraldry of England than the lion. So revered is the lion that the Royal Arms of England features a crest with three lions on it, which was adapted for use in the High Middle Ages. Today, the Lion of England is a national symbol and the first design release in the Queens Beast Collection. Right now, 2017 1 oz British Platinum Queens Beast Lion Coins are available to purchase online from JM Bullion with NGC certification.

Each of these 2017 1 oz British Platinum Queens Beast Lion Coins earned a near-perfect certification from the NGC. Coins with an MS69 grade exhibit full, original mint luster and a maximum of two minor detracting flaws. These defects are limited in type to minuscule contact marks or hairlines, and found only outside the primary focal areas.

The modern Lion of England design for the Royal Arms is a red shield with three lions arranged in a column. This design has at times been combined with those of the Kings of France and Scotland, a symbol for Ireland, the House of Nassau, and the Kingdom of Hannover. Originally adopted in England in 1154 by the Plantagenet kings, it has never changed in form since King Richard Is rule from 1189-1199.

On the reverse of each 2017 1 oz British Platinum Queens Beast Lion Coin is the image of the Royal Arms of England in the foreground, with a massive crowned lion standing on its hind legs behind the coat of arms. It raises one forepaw in the air in preparation to strike, while the other rests atop the shield.

The obverse of all Queens Beast Lion Coins includes the latest effigy of Queen Elizabeth II. Designed in 2015 by Jody Clark, this fifth-generation right-profile portrait of the Queen captures is the newest to grace British coinage.

If you have questions, please contact JM Bullion. Our customer service team can help you at 800-276-6508, via our live chat, and through our email address.