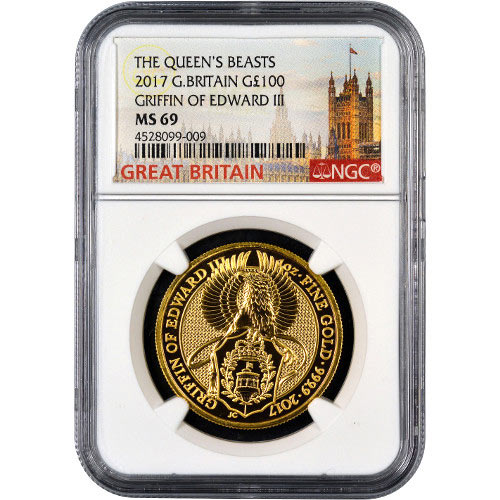 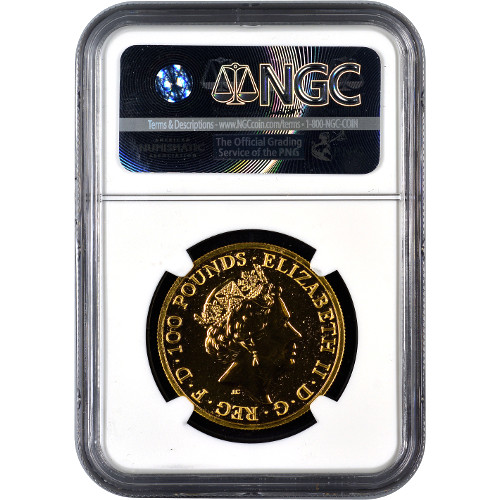 The Queens Beast collection from the Royal Mint is a truly special offering to investors and collectors looking to buy gold. The .9999 pure gold content is ideal for investors, and the 10-planned designs in the series make it a great choice for collectors. Today, the 2017 1 oz British Gold Queens Beast Griffin Coin is available to you online from JM Bullion with NGC certification.

When Queen Elizabeth II was crowned Queen of England in 1952, her official coronation ceremony actually didnt occur until early 1953. When it did happen, there were 10 creatures sculpted to represent the history of the British monarch which stood around her in Westminster Abbey.

All 2017 1 oz British Gold Queens Beast Griffin Coins in this listing have earned Mint State 69 certification from the NGC. Coins in this condition show full, original mint luster, but also possess minor flaws. There are a maximum of two minor detracting flaws on these coins, which are limited to miniscule contact marks or hairlines outside the primary focal areas of the design field.

On the reverse of all 2017 1 oz British Gold Queens Beast Griffin Coins is the image of the griffin created by Clark. It depicts the Griffin standing with its front legs and talons grasping the seal of Edward III. The griffin was very closely associated with Edward III, who ruled for more than 50 years and used the griffin on his private seal.

The Queens Beast coins are a product of the Royal Mint. Founded in the 8th century in London, the Royal Mint has evolved over time from a collection of provincial mints to one, sovereign minting organization.

Please dont hesitate to contact JM Bullion with questions. You can reach our customer service team at 800-276-6508, connect with us live online, or send us an email with your inquiries. Dont forget to check the latest price of gold and silver on our website at any time!

David from TX - April 20, 2017
"Beautiful coin and to me well worth the premium for NGC MS-69 certification and encapsulation. To the casual observer, flaws are almost imperceptible. Under scrutiny, the minute unique details of your specific coin can be matched to the images of it stored on the NGC website. I purchased several "new" 1 oz gold BU coins from another vendor that were noticeably scratched which I returned for refund. Buying NGC certified MS-69 is the affordable way to go to be assured you will receive a quality coin and to provide confidence that the coin itself is the same is what was graded by NGC."