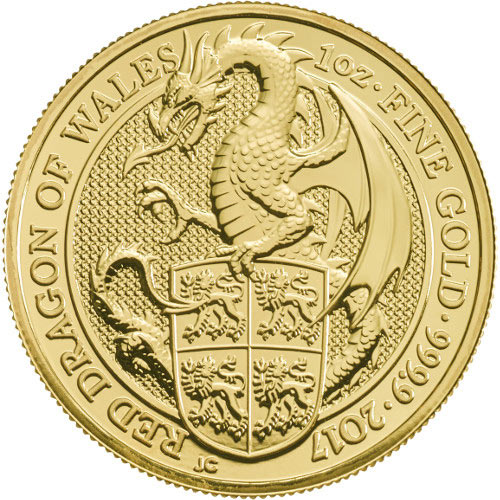 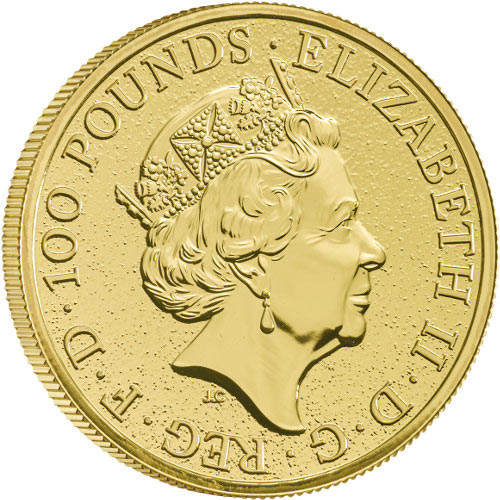 The British Queen’s Beast collection of silver and gold coins from the Royal Mint is a brand-new offering from the United Kingdom’s sovereign mint, and it offers a stunning glimpse into the heraldry and images of the British Crown. The planned 10-coin release celebrates the coronation of Queen Elizabeth II in 1953, as well as the monarchy’s history. The 2017 1 oz British Gold Queen’s Beast Dragon Coin is available to you today online from JM Bullion.

The Red Dragon of Wales is the third design release in the Queen’s Beast collection of silver and gold coins. The red dragon was a badge originally used by Owen Tudor, and is based upon the story of the dragon on Llewelyn the Last’s castle grounds. Henry VII took on the symbol in a nod to his supposed descent from the Cadwaladr.

All new from the Royal Mint, the Queen’s Beast collection features a total of 10 designs, with releases scheduled to run through 2021. For 2017-2020, there will be two designs released each year, with one apiece from 2016 and in 2021. These new 2017 1 oz British Gold Queen’s Beast Dragon Coins represent the third release, and second of 2017 in the collection.

On the reverse of the 2017 1 oz British Queen’s Beast Dragon Gold Coin is the image of the Red Dragon of Wales. The dragon is often depicted holding a shield bearing a lion in each quarter of it, which was the coat of arms for Llywelyn ap Gruffudd, the last true and native Prince of Wales.

The obverse includes the portrait of Queen Elizabeth II as referenced above. Her Majesty ascended to the British throne in 1952 following the death of her father, the king. Her coronation ceremony was held in 1953 and included 10 plaster statues of Queen’s Beasts.

Each 2017 1 oz British Gold Queen’s Beast Dragon Coin in this listing is in BU condition. Coins in this condition exhibit no signs of wear and tear, though you may notice minor flaws ranging from breaks in the luster and spotted surfaces to contact marks from the coining process.

We encourage all JM Bullion customers to reach out to us with questions. You can contact our customer service team at 800-276-6508, chat with us live online, or send us an email.

Jennifer from - April 01, 2020
"A gorgeous, beautifully designed coin. One of the best by the British mint!"