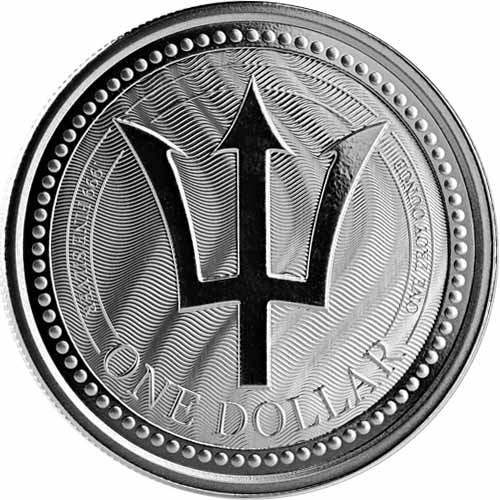 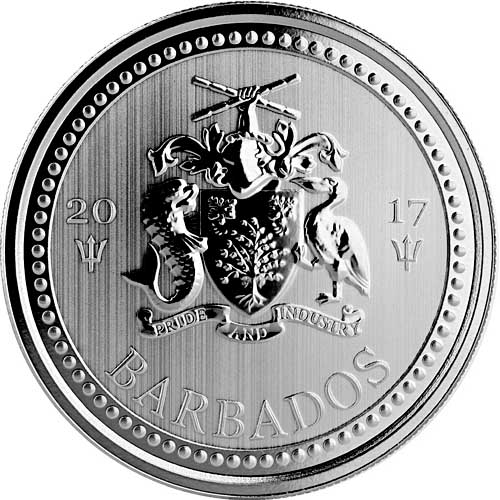 Scottsdale Mints foray into the production of silver bullion coins in conjunction with foreign central banks is now expanding into the Caribbean. Following the release in early 2017 of a silver coin for the Cayman Islands, Scottsdale now offers a new coin issued for the tropical paradise of Barbados. Today, the 2017 1 oz Barbados Trident Silver Coin is available to you online from JM Bullion.

In this first release of a brand new series of coins from Scottsdale Mint, the nation of Barbados in the Lesser Antilles debuts for the first time on a silver bullion coin series in the modern era. The coins in this release have a proof-like finish to them, lending typical visual traits of brushed finishes and mirrored aspects.

The trident is a key piece of symbolism for this island nation. Ancient Roman civilizations believed that the god Neptune, ruler of freshwaters and the seas, controlled the waters around the world with a powerful trident. While it was a weapon for the god Neptune, in the real world the trident was a three-pronged spear used in fishing or as a polearm in battle.

Perched at the very eastern edge of the Lesser Antilles, the Caribbean Sea on one side and the Atlantic Ocean on the other, Barbados is a nation more than familiar with the forces of wind and water. The trident appears on the national flag, as well as forming a critical piece in the national emblem.

The obverse of the 2017 1 oz Barbados Trident Silver Coin includes the national emblem of Barbados. The central crest and its surrounding figures highlight the natural splendor of the island, with a national motto of Pride and Industry on a banner below. An arm extends above the top of the crest with a broken trident shaft, symbolizing Barbados break with the United Kingdom in 1966 when it gained independence.

On the reverse of the coin youll find the full image of a trident head, similar to that found on the national flag of Barbados. It is surrounded by engravings of the face value, purity, metal content, and weight of the coin.

Both sides of the 2017 1 oz Barbados Trident Silver Coin have a beaded edge design around the design field. The reverse has a swerving line pattern, reminiscent of the waves on the ocean. On the obverse, the background has a brushed finish.

Please feel free to contact JM Bullion with questions. Our customer service team is available on the phone at 800-276-6508, on the web using our live chat, or at our email address.

Do Costa from PA - August 28, 2018
"I bought quite a few of these coins and had a jeweler create a silver chain to house it. As a proud Barbarian I look forward to seeing the rest of the series...great job?"

Roger from CA - October 15, 2017
"I bought 5 of these coins and they are beautiful. They arrived in great shape and were priced very affordably from JM Bullion. I also like that they are the first of a new series of coins with a low mintage. I will be looking to buy the next 3 issues of this 4 coin set, from JM Bullion of course."

Farah from OK - September 30, 2017
"simply gorgeous! Scottsdale Mint should be very proud of this issue. out of many bullion coins in my collection, the Barbados Trident is one of my faves. thanks for the great service, speedy delivery and excellent selection, JMB!"