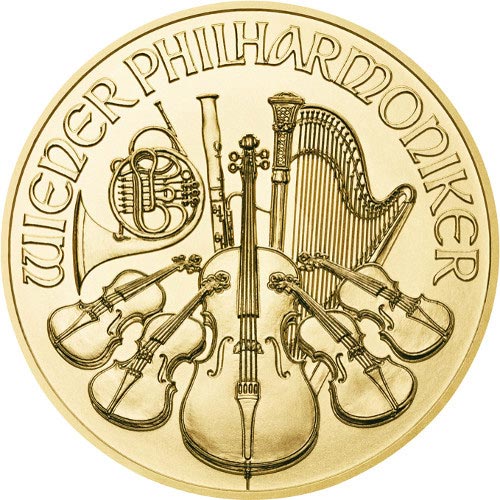 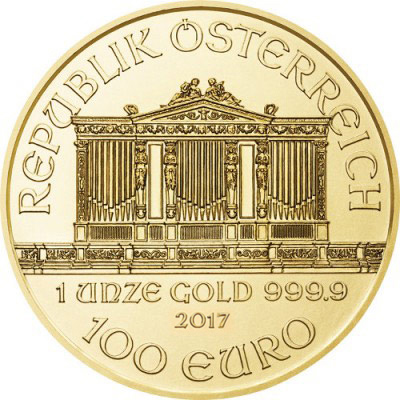 Austrian Gold Philharmonic coins debuted in 1989 with a 1 oz coin and a oz coin available. Both coins had face values listed in Austrian Shillings, the official currency of the nation at that point in its history. Today, the coins have a face value in Euros as of 2002 when the nation joined the common market of the European Union.

The 2017 1 oz Austrian Gold Philharmonic coins available to you today from JM Bullion are in BU condition. Coins in BU condition exhibit no signs of wear and tear, however you may notice flaws ranging from breaks in the luster and spotted surfaces to contact marks from the coining process.

On the obverse of the Austrian Gold Philharmonic coin is the image of the Great Pipe Organ from the Musikverein Concert Hall. The home of the Vienna Philharmonic Orchestra, this image is surrounded by engravings of the nation of issue, weight, metal content, purity, year of issue, and face value of the coin. All engravings are in German.

The reverse of the 2017 1 oz Austrian Gold Philharmonic Coin includes a collection of musical instruments, featuring the cello, four violins, bassoon, harp, and Vienna horn. Engravings on this face include only the name of the orchestra, which is again featured in German like those engravings on the obverse.

Founded in 1194, the Austrian Mint is the official sovereign mint of the nation of Austria. Originally responsible for producing Shillings, the mint now strikes Euros for use in the Austrian economy as part of the European Union.

We encourage all JM Bullion shoppers to contact us with questions. Please feel free to reach out to our customer service team at 800-276-6508, connect with us online through our live web chat, or simply send us an email with your inquiries.

Rick from OH - June 07, 2017
"I ordered my 2017 Gold Philharmonic on Monday and received it Wednesday AM - TWO DAYS! After examining it under my Harris Wide Field 16X loupe, it really exceeds my expectations! Timeless in style and in perfect condition; this doesn't even begin to appear as just "bullion." It is also 37mm in diameter - my largest 1 ounce gold coin so far. The Austrian Mint is recognized as among the best in the world - just as JM Bullion is with all of my gold & silver purchases!"